You can only imagine what type of interest, and money, this would bring.

At a Q&A event in Glasgow, late last year, Conor McGregor must have made Dana White's night.

'The Notorious' told a packed house that he was definitely returning to the UFC, after his boxing hiatus, and that he could even fit in three fights during 2018.

END_OF_DOCUMENT_TOKEN_TO_BE_REPLACED

His stage invasion at a Bellator event in Dublin and role in the attack on a bus carrying UFC fighters, at the Barclays Center, have delayed his MMA comeback but papers have been signed to take on current lightweight champion Khabib Nurmagomedov in October.

The stripped UFC feather- and lightweight champion will return to the sport after almost 23 months away and look to take back his 155lbs crown. UFC 229, in Las Vegas, is tipped to break the promotion's pay-per-view records.

As highly anticipated as that fight is, recent comments from former welter- and middleweight champion Georges St-Pierre already have people looking ahead to a massive super-fight.

"I would be interested in that fight," St-Pierre said earlier this month.

"I don’t think the UFC will let me fight for the title at 155. They will be afraid I’ll relinquish and I’ll leave the division in ruins again."

The Canadian is, of course, referring to him beating Michael Bisping late last year, only to give up the middleweight crown. 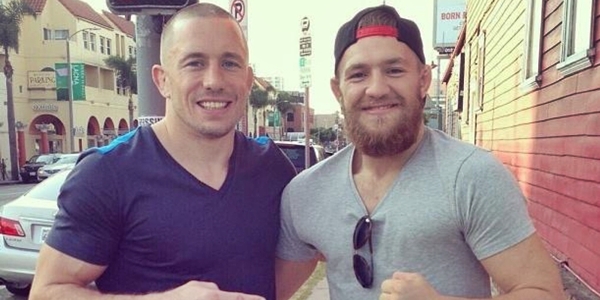 White, the UFC president, was asked about GSP taking on the winner of McGregor vs. Nurmagomedov on The BBC MMA Show. His response was as emphatic as they come.

"I’m not interested in that fight," White declared. "Georges knows that, and I’ve told him that many times."

"Georges St-Pierre is looking for one-off fights where he can make a lot of money, which, it’s smart – that’s what he should do. But we’re not interested in that.

For all of White's bravado on St-Pierre, money and hype often talks in this sport so we would not rule out a catch-weight (160 or 165lbs) bout just yet.