"Pick someone for a hidin', Bob Chapek."

Conor McGregor insists he will challenge for world titles again, but the Plan B proposal from 'The Notorious' has a certain appeal to it.

McGregor is off to box Senator Manny Pacquaio in 2021. Given the way 2020 has shaped up, so far, that news was met with a general, 'Ah... okay' reaction over the weekend.

END_OF_DOCUMENT_TOKEN_TO_BE_REPLACED

McGregor grew frustrated with the UFC rebuffing his match-making proposals, during the summer, so headed off on holidays, got into a spot of bother that required police intervention, in Corsica, and is now getting himself ready to take on another great boxer of his generation.

Before he turned his focus on a return to the boxing ring - after a 2017 bout with Floyd  Mayweather Jr. and an exhibition fight against Michael McGrane in 2019 - McGregor sought to explain to MMA fans why he would not be around for a while.

Choosing to share screengrabs of DMs with Dana White, which the UFC president said went against the 'man code', McGregor explained how he had put forward fight ideas against the likes of Diego Sanchez and Justin Gaethje, and also proposed him fighting in Brazil and his native Dublin.

The 32-year-old was eager to get across that he had tried all he could to line up his second UFC fight of 2020 - after his rapid-fire win over Donald Cerrone - but he had been stone-walled.

In response to White's man code gripes, McGregor fired back to refute claims he had turned down a May 2020 fight with Gaethje:

Code was broke when you lied about me turning down fights mate. I said Justin in May and you went and said I did not want to fight. It’s not about Diego. Diego was a filler to get more fights in.
Also you have been involved in Manny talks the legal letters are there.
Stop lying.

Over the course of the weekend, McGregor mentioned Bob Chapek twice and had many of his followers typing the name into Google [or their other, preferred search engines!].

END_OF_DOCUMENT_TOKEN_TO_BE_REPLACED

Chapek is the head of Disney, which owns ESPN and, thus, has a big say on UFC affairs. For instance, when White wanted to press ahead with events at a Native American resort in California, in the early days of the pandemic, Disney and ESPN put the squeeze on and those events were shelved.

'Pick someone for a hidin', Bob Chapek,' McGregor declared. 'On the house for the mouse, my pleasure'.

McGregor claims he still wants a rematch with UFC lightweight champion Khabib Nurmagomedov, who defeated him in October 2018, but he appears to be more intent on fighting what he would see as legends of the fight game.

He has already stated that he wants to close out his trilogy with Nate Diaz, he accepted Donald Cerrone's call-outs and gave him the biggest pay-day of his career, at UFC 239, and was actively campaigning to fight Anderson Silva earlier this year. The Dubliner was even willing to travel to Brazil to take on 'The Spider' in a catch-weight bout.

The latest potential benefactor of a McGregor money fight is Sanchez. The New Mexico native is 38 now and his best years are well and truly behind him [he fought for the UFC lightweight belt back in 2009].

Sanchez lost to Jake Matthews at UFC 253, on Saturday, to fall to 31-13 in his pro career and 9-11 in his last 20 fights. He is set to lay down his gloves in the coming months but would dearly love to do so with a massive pay-per-view event against McGregor. 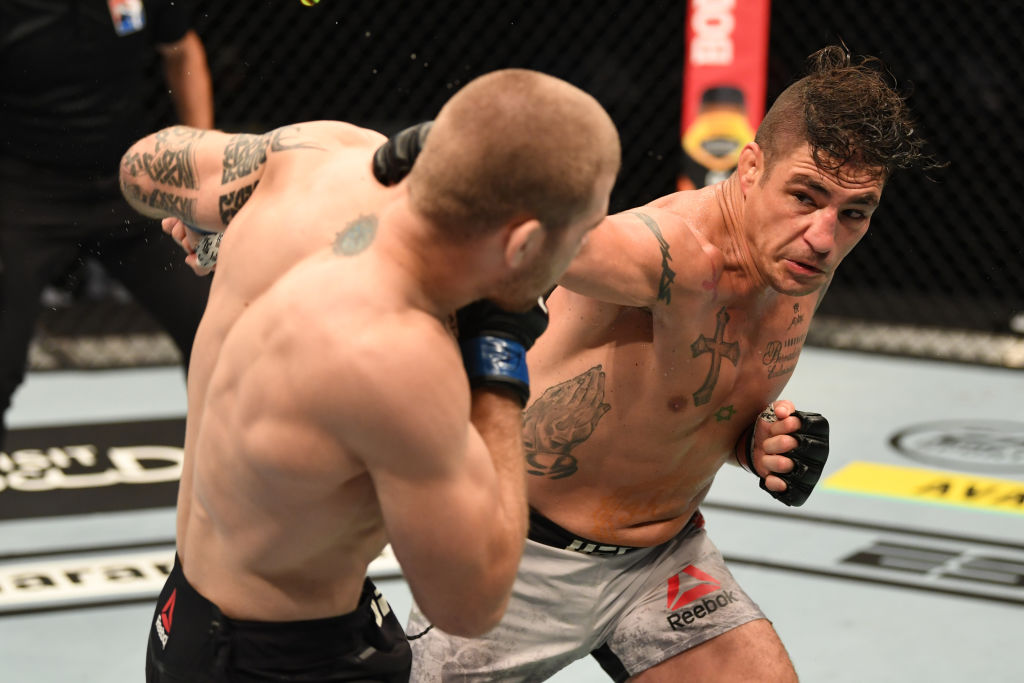 At this stage, with Tony Ferguson, Dustin Poirier, Justin Gaethje and the recently signed Michael Chandler all lining up as potential Nurmagomedov title defences, the UFC should just embrace McGregor's new role. They have already sanctioned a B.M.F [Baddest Motherf*****] belt for Jorge Masvidal to claim after he defeated Nate Diaz, so why not give 'The Notorious' free rein too?

Nurmagomedov's comprehensive triumph over McGregor has installed him as the dominant champion in the lightweight division and McGregor's comeback fight was at welterweight. It would make sense to just line up money fights for McGregor at this stage, if that is what is motivating him.

He grew up as a fan of the UFC and glued to his screen when the likes of Silva, Diaz and Sanchez went to work. Many would rightly point to these fighters being near the end of downward curves, but millions would still tune in to see McGregor see them out the door, and with plenty of smack being talked along the way.

The dream of a UFC fighters' union is stuck in neutral and may never get off the ground. What better retirement plan, we would argue, would there be for many of the retiring greats than to go down swinging against McGregor?

So many fight fans want to see Conor McGregor reach the mountain-top again. It could yet be possible.

If not, killing off some legends and filling pockets may not be a bad way to go for McGregor 3.0.