Conor McGregor gets into back-stage altercation with Rafael Dos Anjos

Perhaps we will soon get the fight we were all looking forward to, back in 2016.

There was an interesting fork in the road moment in Conor McGregor's fight career and it involved Rafael Dos Anjos and a broken foot.

Back in February 2016, fight fans were looking forward to McGregor's first bout in the UFC's lightweight division. 'The Notorious' was not long off his featherweight title win over José Aldo and eager to stay active.

END_OF_DOCUMENT_TOKEN_TO_BE_REPLACED

The plan had always been to go up a weight division, to 155lbs, as he had done at Cage Warriors. The Dubliner was seeking to become the UFC's first ever champion in two weight divisions at once [months before the 'Champ Champ' moniker was born].

Dos Anjos called McGregor 'the easy fight' to pick and the pair even had a feisty press conference to promote the bout before the Brazilian broke his foot in training. At the time, his coach Rafael Cordeiro told Combate:

"I am devastated, because we were preparing well for this fight and we were ready."

And so it was, the paths diverged. Here is how the next year played out for both men:

DOS ANJOS: Lost his lightweight belt to Eddie Alvarez in July 2016. Lost to Tony Ferguson in November 2016. Moved up to welterweight.

MCGREGOR: Took on Nate Diaz at UFC 196, and lost. Retired from MMA. Returned in August 2016 to avenge Diaz loss [both at welterweight]. Beat Alvarez in November 2016 to win UFC lightweight strap. 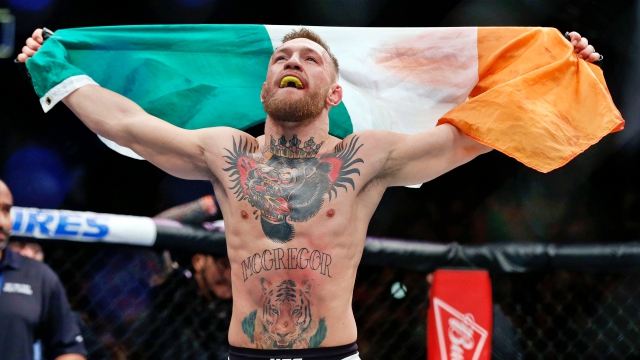 The only reason McGregor fought at welterweight was because Diaz would have struggled to make 155lbs at short notice. The featherweight champ tapped out against Diaz and was offered a rematch at lightweight but stayed at 170lbs to prove a point, which he did as he won by decision.

That was as close as McGregor and Dos Anjos got to dancing, until Friday in Las Vegas.

'You bottled it', Dos Anjos

END_OF_DOCUMENT_TOKEN_TO_BE_REPLACED

After McGregor had tipped the scales for his UFC 264 trilogy fight with Dustin Poirier, he had a back-stage altercation with his old, intended foe. As captured by the UFC 'Embedded' cameras, the 32-year-old took offence to being mocked as he walked by.

"Don't ever forget it, you little rat!"

The cameras soon caught up with Dos Anjos, who returned to the lightweight division last November with a split decision win over Paul Felder. He claimed it was McGregor that had started the flare-up.

McGregor's day was not yet done. He still had a ceremonial weigh-in and final face-off with Poirier ahead of their headliner fight.

Having been caught with a McGregor knee to the ribs, as he tried to separate the pair at the pre-fight press conference, UFC president Dana White was taking no chances and did not let them get too close.

McGregor says lightweight champion Charles Oliverira is next, after he is done with Poirier. Suddenly, and conveniently too, there could be an old score to settle with another Brazilian in the near future.