"It is an absolute honour to see you fight."

Conor McGregor was as gripped as the rest of us as he watched Katie Taylor battle to another defence of her world titles.

Taylor successfully defended her WBA and IBF titles by comprehensively out-pointing Cindy Serrano on her way to an impressive victory.

McGregor was a rapt supporter, ringside, and he was fortunate enough to visit Taylor backstage after her win. 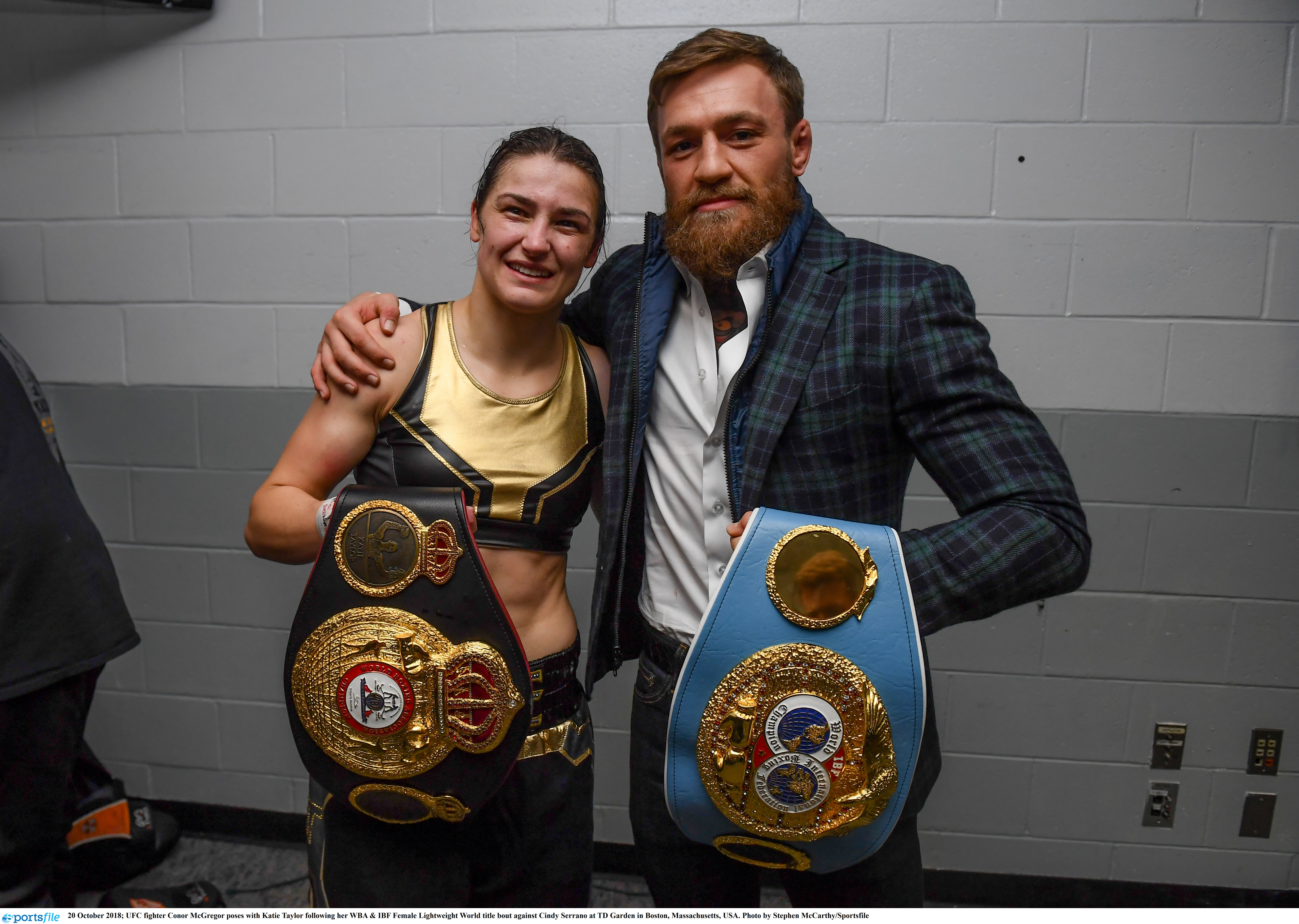 McGregor's comments to Taylor, backstage, were pure class. After Taylor thanked him for coming, McGregor said:

"No, thank you. It is an honour to see you live. Big respect Katie, honestly.

"Big respect, honestly. But you were enjoying it; hand behind your back. If they are not enjoying it, then enjoy.

"But they should have given you a microphone [after you won]. You're in your environment... but honestly, honestly, you put all of us to shame. You are a special talent."

McGregor then told Taylor that he was looking to get a rematch with Khabib Nurmagomedov before posing for pictures and lavishing her with more praise. He declared:

"You're a special, special talent. Filled with hard work - you can see it and big respect to you.

"You know my number Katie. Let me look after you! Come here, give me another hug...

"I'll hit you up and I'll see you soon... I'm delighted to come here and see you live. You're unbelievable Katie.

"You deserve way more respect. Take your respect; demand it.

"That's why I would have loved if they had given you the mic. Start taking on the division, and going at it. Because you have the ferociousness in you. You're ruthless in there. I could see it in your eyes when you were in there.

"So just keep doing your thing. I have your back all the way. I'll back you all the way; whatever you need.

"It is an honour for me to come and see you. You're an Irish hero, and I mean that."

Coming from a two-time champion - in Cage Warriors and the UFC - that is high praise. One hopes Taylor gets the profile boost she deserves after her latest win, and her glowing endorsement from McGregor.


popular
"I remember just hugging this Irish guy" - How one Kiwi rugby star reacted to Ireland's historic series win
Mario Balotelli, Luis Suarez, Fernando Torres and why Rio Ferdinand "hated them"
"I don’t trust you" - Joey Barton delivers brutal dismissal of Irish defender
Down county football is in tatters, but Conor Laverty is the man to piece it back together
"I'll ask for everyone that comes to the game to wear purple and roots for us" - Pat Fitzgerald
Gatecrashed interviews and chip-shop previews - Wexford GAA's online coverage sets the standard
Javier Hernandez offers to play for Manchester United for free
You may also like
1 month ago
Jorge Masvidal speaks about defending BMF title against Conor McGregor
2 months ago
Dana White reveals who Conor McGregor could fight on UFC return
2 months ago
Conor McGregor says he knows his next UFC opponent and fight date
3 months ago
Conor McGregor responds to Michael Chandler's callout after UFC 274
3 months ago
Conor McGregor and Jake Paul involved in heated Twitter exchange after Katie Taylor fight
3 months ago
"For a few years Conor McGregor was the top, top man, and it was just incredible to watch his rise"
Next Page