The famous words still evoke a gush of giddy feelings that many Irish fight fans experienced in the chaotic moments after Conor McGregor sparked Jose Aldo at UFC 194.

McGregor had just defeated the legendary featherweight in just 13 seconds to claim his first UFC title. McGregor roared out an ode to his homeland and to the thousands of Irish fans that had travelled to Las Vegas to see history being made.

END_OF_DOCUMENT_TOKEN_TO_BE_REPLACED

A little over four years on and McGregor will still be relying on the travelling Irish support to roar him on as he makes his latest return to the UFC. There will still be a sizeable Irish contingent at the T Mobile Arena but numbers are not expected to touch that of the throngs that descended on the city back in 2015 and 2016.

Having only fought once in the UFC since November 2016, and experienced a myriad of legal issues in the intervening years, McGregor was asked during his wide-ranging chat with Ariel Helwani about many of his Irish fans losing 'faith in you'.

"The support of the people means a lot to me," he began. "I do this to entertain the people.

"This is for my fans and my people who believe in me - and not so much anything that's gone on, just my lack of commitment. I think that people who believe in me and support me, they deserve better. And I wish to give them that, and I will. And I am. Like you said, people can see that. And I'm putting in the work, and I'm putting in the focused work. And that's why we're all in good spirits." 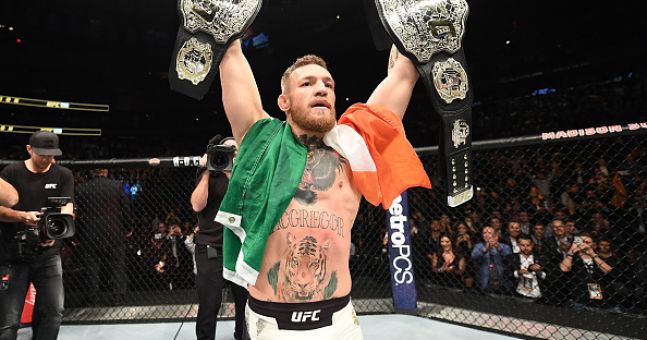 END_OF_DOCUMENT_TOKEN_TO_BE_REPLACED

Helwani then hit upon a word that certainly seemed to rile 'The Notorious'. "Do you feel," the experienced MMA reporter asked, "like they are back on your bandwagon, or do you think you have to do something on January 18th?"

"Man, if there's even a thought of that, well, then they're not really with me anyway, right? So, look, I've got my team, my people. I know who's with me, and I know who's not. I'll say a prayer for those who curse me and try and bring harm to me, and move on and stay focused on the positive aspects of my life. And there are many, many great things in my life. And that's it."

END_OF_DOCUMENT_TOKEN_TO_BE_REPLACED

Having lost his last UFC outing to Khabib Nurmagomedov and then sat out for 15 months due to suspensions and injuries, McGregor will feel he has a lot to prove when he faces Cerrone.

First and foremost, though, he wants to prove to himself that his deeds in The Octagon will back up his words now, and the months of hard work that have taken him up to this point.