For McGregor, the symmetry is almost too good to deny.

After a severely disrupted 2019 and 2020, some of it at his own doing, 'The Notorious' is back in good shape and focused on a busy fighting schedule in the UFC. He wanted a four-fight 'season' this year but the Covid-19 pandemic, restrictions on having crowds at events and negotiating wrangles prompted him to retire from the UFC for the second time in four years.

END_OF_DOCUMENT_TOKEN_TO_BE_REPLACED

As with his last retirement, there were soon rumblings of a comeback. McGregor was eager to fight Anderson Silva, Justin Gaethje and Diego Sanchez at various stages but the UFC held firm and insisted they could do something big and bold when they were given enough notice, and a top-level opponent.

McGregor countered by announcing that he would be boxing Manny Pacquaio in 2021 and then agreed to fight Dustin Porier in Dublin in a bout that would raise money for the American's charity, The Good Fight Foundation. With McGregor and Poirier presenting a united front, the UFC came to the table and bout agreements were drawn up for a do-over of their 2014, which the Dubliner convincingly won. 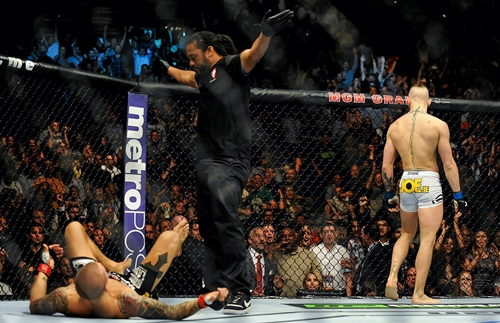 The good news is that the bout is all but confirmed - MMA Fighting report Poirier has signed his contract and that McGregor is committed to - but the bad news is that contest looks set for 'Fight Island' [Das Island, in the Persian Gulf]. McGregor wants to fight on December 12 - coming to the rescue of the troubled UFC 256 card that was supposed to feature Amanda Nunes - but White has other plans.

"January 23 on Fight Island, if everything goes according to plans," White told ESPN. "There are a tonne of if’s right now. I have to see where the world is at in the next couple of months."

END_OF_DOCUMENT_TOKEN_TO_BE_REPLACED

One of the questions White and the other UFC brass will have to figure out is whether Poirier and McGregor will fight for the lightweight belt. Khabib Nurmagomedov announced his retirement after defeating Gaethje at UFC 255 but White insists 'The Eagle' still holds the 155lbs strap.

For McGregor, he is eager to focus on a fighting return. December is ideal but he will surely make January work. On Tuesday evening, he posted:

'I am very grateful to be about to return and get to do what I love again. I look forward to the fresh test Dustin will bring since our first bout, while also showcasing my own incredibly deep cache of weaponry. Whatever tool is needed on the night will be pulled from the duffel.

'I am also really excited about aiding Dustin's charity “The Good Fight Foundation”, which through the donation, will build a gym/premise for disadvantaged youth in his childhood hometown. I truly love this, and pledge to match the donation on a premise in my own childhood hometown! Both spots with an ode to the upcoming bout.'

END_OF_DOCUMENT_TOKEN_TO_BE_REPLACED

It has been a trying year for the UFC, with multiple cards cancelled or re-jigged at late notice due to Covid restrictions and positive tests. For the promotion, if they can convince Nurmagomedov to fight on and have McGregor fight in January, 2021 will already be looking up.