Nurmagomedov went on to claim the 155lbs belt while McGregor and SBG training partner Cian Cowley handed themselves in to Brooklyn police and are now due for trial, in relation to the bus attack, on June 14.

Hardy, a former UFC star who now commentates on the sport, told The BBC MMA Show that the promotion may put the financial losses of three fights from the UFC 223 card [involving Michael Chiesa, Ray Borg and Lobov] on McGregor's shoulders.

"You can guarantee that the purses that need to be paid and the money that needs to be made up is coming out of Conor McGregor's pocket, because the UFC will take him to court for that. It's his fault those fights didn't go ahead.

"I think we'll get to see him fight in the next six to 12 months but the financial implications of this escapades will be much bigger." 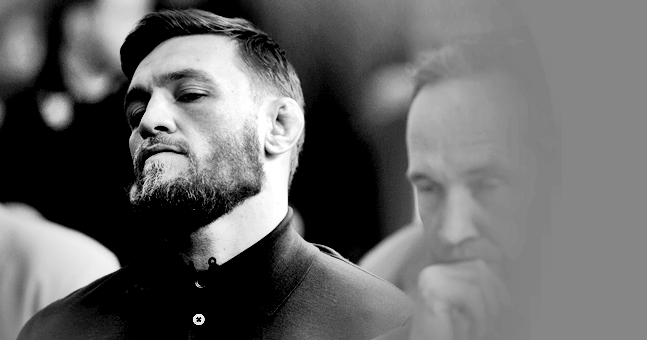 Hardy believes McGregor has benefited greatly from the focus that Mixed Martial Arts, and preparing for fights, has brought him but claims his motivation to take to the Octagon must be driven from a desire to be the best rather than anything money-related.

MMA writer Nick Peet, who was also on the BBC podcast, believes McGregor's return will most likely be against the newly crowned lightweight champion, Nurmagomedov. He commented:

"I don't know if anyone saw it but Khabib arriving back into Dagestan with the belt was insane. It was kind of like The Beatles coming back to Liverpool in the 1960s. It was unreal.

"UFC Russia has got to happen in the next six months and there is absolutely no bigger fight - it would sell out that Olympic Stadium that they've got over there - than Khabib versus McGregor. I think it would be huge. And, you know what? I wouldn't be surprised if McGregor wins.

"They've got a perfect narrative now. McGregor has attacked the bus that Khabib was on. The story is all there and it's just about how it plays out. That's the fight they need to make next."

END_OF_DOCUMENT_TOKEN_TO_BE_REPLACED

The Luzhniki Stadium in Moscow has an 81,000 capacity and any event headlined by Nurmagomedov, especially with McGregor's involvement, would stand a fine chance of smashing all UFC records and selling out.

UFC president Dana White told a Russian reporter, after last Saturday's pay-per-view, that the promotion is definitely heading to his country before the end of the year. He did state that the first event in Russia would feature local fighters but that Nurmagomedov was unlikely to feature on the card.

Instead, the UFC may look to cut their teeth with a 'Fight Night' event before returning at a later date with a strong PPV card. Last July, White was only too happy to boast about McGregor's comeback comments. He told MMA Junkie:

"You know what Conor told me? He said, ‘I want Khabib in Russia'. Isn’t he f***ing awesome?

"He’s like, ‘I want Khabib, in Russia’. He’s awesome. Conor McGregor is a f***ing unicorn. There’s nothing like him. He’s working on boxing Floyd Mayweather and then he’s talking about fighting Khabib in Russia right after."

The current UFC record for biggest crowd is 56,214. That is how many attended UFC 193 in Melbourne, when Holly Holm stunned women's bantamweight champion Ronda Rousey. The previous record was 55,724 for UFC 129 in Toronto.

Nurmagomedov vs. McGregor, in Russia, New York, Las Vegas or anywhere, would most likely smash every record on the books.


popular
Jake Paul set upon by Floyd Mayweather and security staff after confrontation
The Garry Ringrose narrative around the Lions Tour is complete bull
"Sadly at this point in time, it's Johnny" - Why Sexton missed Lions spot
South African media shocked by Lions omissions of Sexton and Ryan
'Jesus Christ! How am I going to put up with this lad for nine weeks?!'
The biggest Lions head-scratchers as Warren Gatland surprises us all
You'd swear the world was ending as Spanish tv host goes after Eden Hazard
You may also like
1 week ago
Chris Weidman snaps leg in half while kicking opponent after just 17 seconds
1 week ago
Daniel Cormier clashes with Jake Paul during UFC 261 broadcast
1 week ago
Kamaru Usman makes Jorge Masvidal eat his words with devastating KO
3 weeks ago
McGregor and Poirier relationship turns sour over $500,000 donation
1 month ago
Exciting UFC 264 card takes shape as McGregor signs up for trilogy
1 month ago
Dejan Lovren lasts entire minute in cage fight with UFC legend Mirko Cro Crop
Next Page