Now would be the perfect time for Nate Diaz to return to the Octagon.

With such a dearth of stars at their disposal right now, the UFC could really do with Nate Diaz taking another fight.

Their biggest superstar, Conor McGregor, looks set to be sidelined for a while after his antics at Bellator Dublin. Newly-crowned middleweight king Georges St-Pierre doesn't seem too likely to take another fight before the year's end. Holly Holm reportedly can't agree on terms to fight Cyborg and as for Jon Jones, well... the less said about that the better.

END_OF_DOCUMENT_TOKEN_TO_BE_REPLACED

At the time of writing, the UFC 219 card does not have a headline act. Considering 2016's end-of-year PPV featured Ronda Rousey in the main event, one would think the promotion has plans to close out 2017 with a bang. The question remains, who is going to be tasked with the challenge of bringing eyes to that card?

There are rumblings of welterweight champion Tyron Woodley being in line to feature on the card and supposedly, everyone's least favourite heel Colby Covington won't be the title challenger. Diaz has a 50% record at 170, but Woodley would kill for a money fight right now. That match-up isn't out of the question with the current UFC owners pulling the strings.

END_OF_DOCUMENT_TOKEN_TO_BE_REPLACED

Interim lightweight champion Tony Ferguson may need a new dance partner if McGregor receives a hefty ban for what happened in the 3Arena. With all the other top lightweights booked up, Diaz could slot right into a huge main event against 'El Cucuy.'

Interestingly, Diaz's strength and conditioning coach Jose Garcia sent out a post on Instagram on Tuesday which suggested the Stockton native had begun a new fight camp. It's difficult to tell how serious this post should be taken considering it was swiftly deleted, but if Diaz is coming back now, his timing would be exceptional. 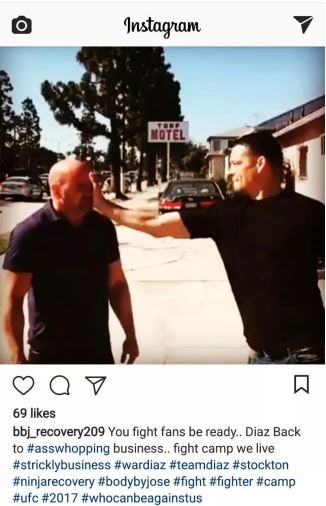 The last time we saw Diaz inside the Octagon, he was losing a majority decision to McGregor at UFC 202. That went down in August 2016.

A lot has changed since then, but the UFC will probably be hoping he can still draw a crowd.


popular
Barcelona allowed to register four new signings, but Jules Kounde misses out
"He can add something to our attacking line up" - Jamie Clarke signs for Northern Irish soccer club
Angry Frenkie de Jong 'tells Barcelona teammates he could join Man United'
Erling Haaland registers strange statistic on home debut as Mark Travers keeps the City score down
Ranking the best county GAA songs of all-time (32-1)
"It was unfair on the Galway backs” - Tomás Ó Sé admits that Kerry benefitted from unfair rule
Antonio Conte 'banishes' four Tottenham players from first-team
You may also like
1 month ago
Jorge Masvidal speaks about defending BMF title against Conor McGregor
2 months ago
Dana White reveals who Conor McGregor could fight on UFC return
2 months ago
Your guide to a great weekend of sport and how to stream it all
2 months ago
Conor McGregor says he knows his next UFC opponent and fight date
3 months ago
Commentating cage-side, Daniel Cormier missed the UFC knock-out of the year
3 months ago
Conor McGregor responds to Michael Chandler's callout after UFC 274
Next Page