It's fair to say that Conor McGregor doesn't necessarily have to beat Floyd Mayweather to emerge as a winner.

Just push McGregor's confidence to the side for a second and think about this logically.

He's never competed in a professional boxing bout in his life. For his debut, he wants to take on a guy who's never tasted defeat and has been consistently outclassing the world's elite. A man who has perfected the art of avoiding getting hit against opponents who have spent the entirety of their lives dedicated to mastering the art of hitting.

END_OF_DOCUMENT_TOKEN_TO_BE_REPLACED

On paper, Mayweather should absolutely dominate him inside the ring, and when the fight actually gets confirmed, the odds will reflect that probability. Very few people are expecting him to win and some are doubting he can even compete with the elite pugilist.

If he manages to hang in there and prevent this from developing into a one-sided affair, he can walk away proud of his performance with his head held high.

McGregor's unorthodox movement, the fact that he will bring skills over from MMA that boxers may not be used to, as well as his size and power advantage makes it an interesting match-up. Mayweather has never fought anyone like him before and he knows what kind of problems that Celtic cross can cause. 'Money' would be foolish to underestimate him.

However, Mayweather should still win, and anything short of that could be seen as an embarrassment to the sport of boxing. Chael Sonnen believes that, as he told FightHubTV.

"The public dismisses boxing as a fringe, fake, and phony sport, and the public may just be right! The fact that you can take a guy that has never lost in professional boxing and put him in there with a guy who has never done professional boxing and have a lot of people including people in the industry of boxing think that the guy who has never done it is going to beat your undefeated greatest of all time is an embarrassment for the sport." 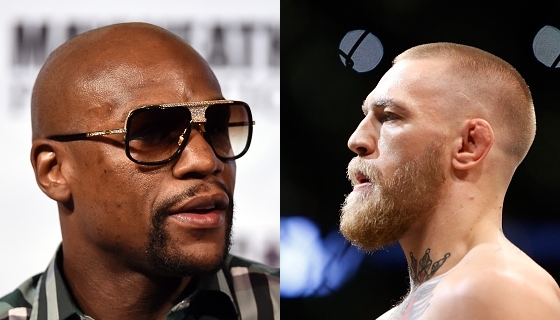 END_OF_DOCUMENT_TOKEN_TO_BE_REPLACED

Anyone who's followed the career of 'the American Gangster' knows how to handle his opinions. Be entertained, but be wary - he's one of the best shite-talkers in the game.

Despite all these factors that make 'the Notorious' a dangerous opponent for anyone, Sonnen reckons that anything other than Mayweather delivering an absolute murking would discredit the sport of boxing entirely.

In order for this to happen, Mayweather would have to complete the quickest knockout of his career. Prior to this fight, Mayweather's fastest finish came in 1997 when he took 72 seconds to put away Tony Duran.


popular
From Canada to Carlow in the name of hurling: Nicolas Redmond's journey to the Fitzgibbon Cup
Ireland fitness update offers even more reason for Six Nations optimism
Kerry's captain selection for 2022 sums up the problem with their outdated system
"It must be difficult to say no, having won a game and heading back together"
Chelsea forced to change Stamford Bridge changing room after Liverpool complaint
Eddie Jones shares great tale on hour-long chat with 'inspirational' Roy Keane
Jesse Lingard 'angered by lack of respect' shown by Man United
You may also like
2 months ago
Ian Garry on the message he received from Dublin GAA star before his UFC win
2 months ago
Conor McGregor posts emotional 5-minute voice message to Ian Garry after UFC debut win
2 months ago
"The Irish are back, baby!" - Ian Garry pays tribute to McGregor after UFC victory
2 months ago
Dublin's Ian Garry scores sensational knock-out win at UFC 268
3 months ago
UFC star Paddy Pimblett "kicked out" for celebrating Liverpool goals in Watford end
3 months ago
José Mourinho swaps Conor McGregor a Roma jersey for some whiskey
Next Page