Bob Sapp actually took on a bear and was comfortably beaten

The smart money says that as long as Bob Sapp competes in any combat sport, losing is an inevitability.

Sapp is a unicorn in MMA. While most fighters build up a following because of their ability to fight or their skill behind the mic, Sapp has become a cult figure for his proficiency in losing and the manner in which he is easily dispatched.

In MMA, the Longest Yard actor is riding a 14-fight losing streak. None of the bouts in that run went the distance. He was finished in all but one. He was disqualified from that fight for using illegal slams.

Before the world belted out Auld Lang Syne while doing that weird arm dance, we were teased about the possibility of Sapp fighting a bear. As ridiculous as it sounded, it was also a plausible match-up. 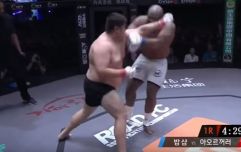 END_OF_DOCUMENT_TOKEN_TO_BE_REPLACED

Sure enough, the fight went ahead as planned inside a bizarre cage somewhere in Japan. A pane of plexiglass separated both man and beast as they used it to try to shove each other backwards. In order to win, the fighter needed to push their opponent past a certain point in the cage.

There was always going to be only one winner here.


popular
World Cup Power Rankings: The top eight pundits of the tournament so far
Talksport presenter puts Martin O'Neill to the pin of his collar over Declan Rice and Jack Grealish
Rory McIlroy explains 'falling out' with Shane Lowry that lasted a few years
'I just became obsessed with football' - Cruciate curse actually a blessing for Sheehan
World Cup Power Rankings: The top 10 players at the tournament ahead of the quarter-finals
Ariel Helwani shares Paddy Pimblett WhatsApp messages as spat becomes public
"There's no soccer, hurling, or rugby" - Kilcoo's secret to success
You may also like
7 months ago
'All those guys are overpaid' - Dana White slams boxing salaries
7 months ago
"For a few years Conor McGregor was the top, top man, and it was just incredible to watch his rise"
7 months ago
Francis Ngannou wants a Tyson Fury clause in his new UFC contract
7 months ago
Daniel Cormier makes fair point about Dean Barry's UFC debut disqualification
7 months ago
Jake Paul says he wants to smash Conor McGregor's 'veneers in'
7 months ago
Henry Cejudo labels Ian Garry as the new 'king of cringe' following UFC 273
Next Page