The time has finally come for one of the most well-rounded Irish fighters to star on MMA's largest stage.

For years, Joseph Duffy has been pegged as one of the most exciting fighting talents to emerge from the island of Ireland. However, he finds himself showing up to the UFC party later than countrymen Norman Parke and Conor McGregor, both of whom he comprehensively defeated. Now it's time for the Donegal native to make up for lost time.

"Irish" Duffy (12-1) will make his UFC debut this weekend against Jake "The Librarian" Lindsey on the UFC 185 early prelims. While a past victory over a certain combat sports superstar might dominate any discussion in relation with Duffy, there's a lot more to him than being "the guy who beat that other guy once". 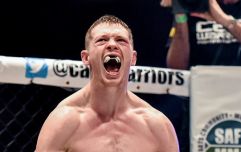 END_OF_DOCUMENT_TOKEN_TO_BE_REPLACED

Joseph Duffy is an absolute monster inside the cage. As a talented boxer, who's undefeated in seven professional bouts, he uses his stellar footwork, head-movement and fluid combinations to set up heavier strikes and submissions.

However, his power isn't limited to his hands. Check out this vicious knee KO against Julien Boussuge in his last fight at Cage Warriors 74. 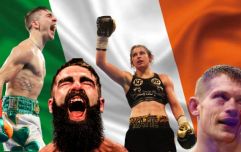 END_OF_DOCUMENT_TOKEN_TO_BE_REPLACED

The problem with boxers who try their hand at MMA is that they tend to be one-dimensional. Whenever a gifted striker emerges from relative obscurity, casual fans have a tendency to assume that their style means they're incapable of dealing with grapplers.

Duffy doesn't live up to this stereotype. He's a more than competent grappler who constantly works in the clinch a la Neil Seery and utilises the leg-trip to set up his ground game. 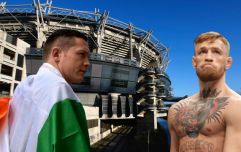 For Joseph Duffy, McGregor rematch in Croke Park is a dream but not a priority

END_OF_DOCUMENT_TOKEN_TO_BE_REPLACED

On the mat, Duffy's top notch. Even when he finds himself in trouble on the bottom, his stubbornness and heart will spur him on to find an escape and even try to reverse the situation.

This artful sweep against Oriel Gaset at Cage Warriors 42 is a prime example of how he can turn defence into attack and secure that dominant top position.

It's all well and good getting the top position, but you have to be able to capitalise on it in this cut-throat business. Laying and praying will bore judges, fans and more importantly, the bosses. Duffy shows urgency on the ground, constantly hunting down the finish. His ground and pound, as Gaset found out, is devastating.

With nine submission victories under his belt, Duffy has earned himself the honour of being classified as a submission specialist. He's got a cast array of submission holds in his repetoire, but favours variations of the choke. Damien Lapilus was on the receiving end of one of a wind-pipe crushing rear-naked choke in Duffy's epic return to the cage at Cage Warriors 70 last year.

He's also pretty decent at the arm-triangle chokes, as you can see from this stunning finish against an unidentified Irish fighter. I wonder whatever became of him.

While Jake Lindsey hasn't really impressed in his two UFC losses, he has excelled in one area, getting his ass handed to him. "The Librarian" is a heavy underdog for this bout and Duffy will be expected to end this fight early. Lindsey's erratic, wild style will make this fight entertaining... for Irish fans, at least.

Duffy should be looking to use this fight to get rid of any UFC jitters and make a statement of intent that he belongs among the world's elite. The Donegal man isn't a jobber like Lindsey, he's here for the long haul.


popular
Noel Gallagher left 'covered in blood' after headbutt from Ruben Dias’ dad
Cutting through the contradictions from one of the worst television segments of the year
Aiden McGeady details the abuse he suffered after playing for Ireland instead of Scotland
Roy Keane shows great comic timing after Jack Grealish party invite
BBC apologise after accidentally posting mocking Man United message live on TV
France the sore losers as Ireland Men reach first ever Sevens World Series final
The FootballJOE Pub Quiz: Week 38
You may also like
3 years ago
Joseph Duffy's comeback from layoff confirmed for UFC London
3 years ago
Manager gives timeframe for Joseph Duffy's long-awaited UFC return
4 years ago
It's really bizarre seeing Joseph Duffy talk about Conor McGregor like this
4 years ago
Referee stoppage of Joseph Duffy fight received its fair share of complaints
4 years ago
Joseph Duffy suffers agonising TKO defeat to James Vick
4 years ago
Joseph Duffy absolutely nails what Conor McGregor's next move should be
Next Page