Just a fortnight before the start of the Cheltenham festival, Gordon Elliott has been dealt the almighty blow of losing all of his Cheveley Park Stud owned horses to fellow Irish trainers Willie Mullins and Henry De Bromhead.

Director of Cheveley Park stud Richard Thompson was on At The Races on Tuesday morning when he confirmed the news that Elliott's stable star Envoi Allen will be heading to Waterford to be trained by De Bromhead with immediate effect. A number of other horses such as Sir Gerhard and Quilixios will be divided amongst Mullins and De Bromhead.

"We made the decision in the last couple of hours to move the horses from Gordon's yard. The eight horses will go between Henry De Bromhead and Willie Mullins.

"Sir Gerhard will go Willie. Quilixios will go to Henry. Hopefully trainers like Henry and Willie will be able to resolve this quickly and it will be smooth."

BREAKING NEWS – Richard Thompson of @CPStudOfficial reveals that all of their horses in training with Gordon Elliott will be moved to Willie Mullins or Henry de Bromhead… pic.twitter.com/LCSmGmks0T

It has been a turbulent 48 hours for the Meath trainer after a photograph did the rounds of him sitting on a dead horse. While Gigginstown House Stud stood by the 43-year-old, his sponsors Betfair pulled the plug on their association with the trainer but the biggest blow was yet to come with the Cheveley Park update. 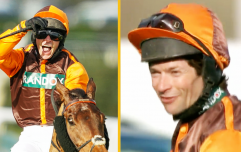 END_OF_DOCUMENT_TOKEN_TO_BE_REPLACED

Indeed, it's been a damaging couple of days for Irish horseracing, with Wexford amateur jockey Rob James having thios morning issued a statement to the Irish Field this morning to apologise for a video that shows him mounting a dead horse.

"To try defending my stupidity at the time would add further insult and hurt to the many loyal people that have supported me during my career. I have caused embarrassment to my employers, my family and most importantly the sport I love," said the Wexford man.


popular
"I remember just hugging this Irish guy" - How one Kiwi rugby star reacted to Ireland's historic series win
Mario Balotelli, Luis Suarez, Fernando Torres and why Rio Ferdinand "hated them"
"I don’t trust you" - Joey Barton delivers brutal dismissal of Irish defender
Down county football is in tatters, but Conor Laverty is the man to piece it back together
"I'll ask for everyone that comes to the game to wear purple and roots for us" - Pat Fitzgerald
Man United target two new forwards as desperate search for a striker goes on
Amad Diallo scores twice as Cristiano Ronaldo sits out behind-closed-doors friendly
You may also like
1 year ago
Everything you need to know about this year's Fairyhouse Easter Festival and Irish Grand National
1 year ago
Afer winning the Gold Cup, Dingle jockey Jack Kennedy's pure passion would get you going
1 year ago
It's not about gender or the history-books anymore, it's all about Rachael Blackmore
1 year ago
Mullins and Moore a pair of class acts after emotional World Hurdle win
1 year ago
There it is, the moment every accumulator on the British isles vanished in the Cheltenham wind
1 year ago
AP McCoy perfectly sums up scale of Rachael Blackmore's ground-breaking achievement
Next Page