WATCH: Rickie Fowler hits unbelievable ace on one of most iconic holes in golf

The island green is one of the most daunting holes in golf.

With TPC Sawgrass is starting on Thursday and all the big guns are out.

Rory McIlroy is back from his honeymoon, Dustin Johnson has shaken off his back injury he sustained before The Masters and world number one Jason Day is out looking to become the first defending champion. 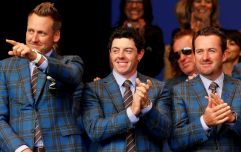 END_OF_DOCUMENT_TOKEN_TO_BE_REPLACED

The 'unofficial fifth major' is one of the most exciting events on the golf calendar and one man hoping to win the tournament will be 2015 champion, Rickie Fowler.

Fowler is also returning after a booze-filled trip to a private resort in the Bahamas but showed no sign of rust on Wednesday in a practice round on TPC Sawgrass' signature 17th hole. 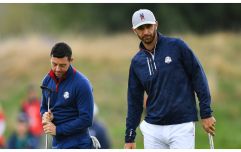 END_OF_DOCUMENT_TOKEN_TO_BE_REPLACED

Fowler was playing alongside best friend Justin Thomas, who accompanied Rickie to the Bahamas alongside fellow PGA Tour players Jordan Speith and Smylie Kaufman, and he was seething with rage after Fowler outdid his efforts on the Island hole.

Fowler will tee off alongside Jason Day and 2016 British Open winner Henrik Stenson in one of the marquee groups while Justin Thomas will play with Rory McIlroy and Dustin Johnson.


popular
World Cup 2022 Day 13: All the major action and talking points
Shay Given on how far Ireland could've gone at the 2002 World Cup with Roy Keane in the team
The SportsJOE Friday Pub quiz: Week 3
From Ireland to Argentina: Alexis Mac Allister's Irish roots explained
Ivan Rakitic criticised for alleged comments condemning 'gays, black people, dwarves and the obese'
Jack Grealish says he regrets his comments about Miguel Almiron
France demand FIFA change result of World Cup defeat over 'rule break'
You may also like
2 years ago
Amateur golfers all over the world unite to emphatize with Rory McIlroy
2 years ago
Jon Rahm on what was going through his head before his epic putt
2 years ago
Rory McIlroy defends Dustin Johnson after Brooks Koepka comments
2 years ago
Brooks Koepka puts PGA Championship leaders on notice with final round comments
2 years ago
Mickleson winds up Faldo as Dustin Johnson grabs PGA lead
4 years ago
Team USA texts after Ryder Cup suggest all may not be what it seems
Next Page