Paul Dunne has just finished off his final round at the Trophee Hasaan II European Tour event in Morocco.

Dunne took a two shot lead into today's final round but unfortunately he couldn't close out what would had been his first European Tour title.

The 24-year-old shot a 72 for his final round but his rival, Edoardo Molinari, shot a 68 to keep the pressure on the Greystones man.

Molinari scored an eagle on the 17th which put all the pressure on Dunne going into the final hole.

Dunne needed a birdie on the 18th to force a playoff and that's exactly what he did.

Dunne put himself in an excellent position on the Par 5 18th and he just needed an up and down to secure the birdie. 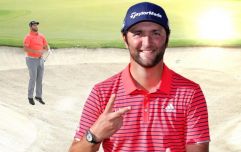 END_OF_DOCUMENT_TOKEN_TO_BE_REPLACED

Molinari and Dunne went back to tee box to begin the playoff but Dunne hit his drive wayward to the right, while the Italian hit the fairway.

Dunne got out of trouble with his second shot but unfortunately found the right-side bunker on his third.

Molinari hit his second into the bunker also, but it was advantage Molinari at that stage.

Molinari had a difficult bunker shot and it proved so, as he overhit his exit and the ball ran across the green and into the rough on the following side.

Dunne's bunker shot was much better than Molinari's and he hit the ball within seven or eight feet of the hole which gave him a good par chance.

Molinari hit his next shot within two or three feet of the whole meaning Dunne had to nail his next putt.

Unfortunately it just didn't drop and Dunne will have to wait a little longer for his maiden European Tour triumph.

Gutted for @dunners11 so close to 1st European Tour title. Here's the putt he needed to make to force another playoff hole #TropheeHassanII pic.twitter.com/8SGpjAZGVo


popular
QUIZ: How many of the 10 most successful football counties can you name without making a mistake?
Conor McGregor and Floyd Mayweather 'in talks' about a rematch
Éamonn Fitzmaurice explains Aidan O'Shea's best position and how it can be used against Kerry
Matt Le Tissier says he asked Sky Sports why they never sacked Jamie Carragher
Patrick Vieira claims he was 'much better' than Roy Keane in new interview
Steve McClaren issues warning to Man United players
You'll have to be red-hot to get 20/20 in this 2010s footballers quiz
You may also like
2 years ago
Shane Lowry on The Bear's Club, Rory McIlroy and who won their money match
3 years ago
Shane Lowry banks another tidy wedge after incredible finish in Dubai
3 years ago
Shane Lowry wins Abu Dhabi Championship after shot of his life on 18
3 years ago
Shane Lowry gives honest reply when asked where he'd be without golf
5 years ago
WATCH: Rory McIlroy loses dramatic play-off in South Africa
1 month ago
Rory McIlroy leaves us all in the ditch after another wild ride
Next Page