He's set be joined by six other high-profile golfers

Less than 24 hours after winning The Open, reports have emerged claiming that Cameron Smith is set to join the controversial Saudi-backed LIV Golf exhibition series.

Smith became the first Australian to win the Claret Jug since Greg Norman in 1993, beating Rory McIlroy to the title at St Andrews.

His celebrations were marred though as a journalist quizzed him on the prospect of joining the LIV Golf tournament, just moments after his famous victory, leading to an angry response from Smith, who refused to rule out a switch.

"I don't know, mate," he said. "My team worries about all that stuff. I'm here to win golf tournaments.

"I just won The Open, and you're asking about that. I think that's not good."

END_OF_DOCUMENT_TOKEN_TO_BE_REPLACED

Several high-profile players have opted to join the Saudi-backed breakaway project, with enormous sums of money on offer to competitors.

The project has received significant financial backing and the total prize money pot across eight events amounts to roughly £205m.

Smith, 28, is also expected to be joined by six other big names in the game. The likes of Tommy Fleetwood and Ryder Cup captain Henrik Stenson have also been touted to make the move. Bubba Watson, Adam Scott, Marc Leishman and last year's Masters champion, Hideki Matsuyama are all reportedly close to announcing their LIV intentions, after The President's Cup.

Stenson is expected to be stripped of his role as Ryder Cup captain, just two months after he was confirmed as the skipper ahead of the famous showdown against the US in Italy next year. 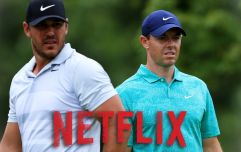 END_OF_DOCUMENT_TOKEN_TO_BE_REPLACED

Sergio Garcia was the most recent name to publicly confirm his defection after resigning from the DP World Tour.


popular
Argentina reach World Cup last-16 with convincing win over Poland
"Nowadays, even if I don't hit a ball, I don't care as long as we win" - Gleeson learning from the past
Iran demand action by FIFA after USA team change flag on social media
World Cup 2022 Day 11: All the major action and talking points
Thibaut Courtois warns teammates after leaks emerge from Belgium camp
Cristiano Ronaldo 'agrees £173m-a-year deal' with Saudi club
Ronaldo finally reveals why he got that hideous haircut
You may also like
17 hours ago
Marcus Rashford reveals the meaning behind his celebration
17 hours ago
Cristiano Ronaldo 'agrees £173m-a-year deal' with Saudi club
1 day ago
Canelo Alvarez duped by fake Lionel Messi Instagram post
4 days ago
Saudi fan switch allegiances after Lewandowski's first World Cup goal
4 days ago
Man United youngster causes scrap from the bench after throwing ball at Australia player
5 days ago
World Cup fans complain that accommodation is 'flooded with sewage'
Next Page