"People hate confidence. That's why people aren't a big fan of me."

So said Brooks Koepka on Friday at the US Open. He then went on to shoot 75 and 77 on his way to a +12 total that was 18 shots worse off than this year's champion, Matt Fitzpatrick.

In what could now be his final event as a PGA Tour player, it was an ignominious end to a tournament that started with some promise. We suspect Koepka's high confidence will not have taken too much of a hit, though.

END_OF_DOCUMENT_TOKEN_TO_BE_REPLACED

It has been reported by The Telegraph and Sky Sports that the American will step away from the PGA Tour and partake in the next LIV Golf event, in Portland, next week. The broadcaster has reported that Koepka's team has removed all references from the PGA Tour on his social media accounts.

The 32-year-old is a four-time major winner and his reported defection from the PGA Tour, to the Saudi-funded LIV series, would be another major blow for its' commissioner Jay Monahan, and his team. The major-winning likes of Dustin Johnson, Bryson DeChambeau, Patrick Reed, Louis Oosthuizen, Graeme McDowell and Phil Mickelson have already jumped ship. Some have been given six-figure pay-outs by LIV Golf to do so.

What makes the Brooks Koepka switch all the more galling was the American trying to take the moral high ground when he was asked about LIV Golf, before teeing it up at the US Open last week. 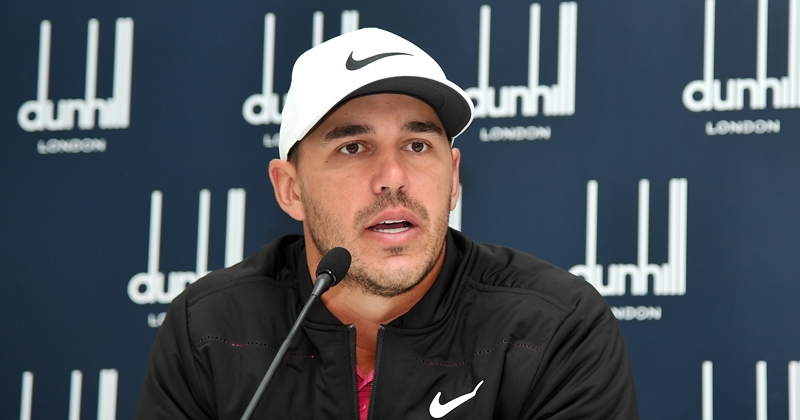 "Y'all are throwing this black cloud"

END_OF_DOCUMENT_TOKEN_TO_BE_REPLACED

Brooks Koepka has been less active than usual, over the past two years, due to the Covid-19 pandemic, injury issues and his recent marriage and honeymoon.

His name had long been linked as a potential 'get' for the LIV Golf organisers, but he was spiky and brusque when asked about it in a press briefing before the US Open got underway.

Eight of the 19 questions that came Koepka's way were about LIV Golf. The first 10 questions revolved around his US Open experiences, his wedding, form and what it takes to win majors [he has won four, to date]. When the Q&A turned to LIV Golf, Koepka answered a few questions before turning on reporters for 'throwing this black cloud' on the US Open.

Here are the LIV Golf exchanges from that day:

Q. [Your brother] Chase played last week in the first LIV event. What do you make of the current landscape? It seems the two tours are fracturing the game at the top level.

BROOKS KOEPKA: Obviously, LIV is trying to make a big push for golf. Look, I mean, I love my brother. I support him in anything he does. It's family. I'll always love and support him. Whatever he does, I'm cheering for him.

Q. Why have you decided stay on the PGA TOUR, and is that a permanent decision?

BROOKS KOEPKA: There's been no other option to this point, so where else are you going to go?

Q. LIV is there now.

BROOKS KOEPKA: As of last week. That's it. I wasn't playing last week. I'm here. I'm here at the U.S. Open. I'm ready to play U.S. Open, and I think it kind of sucks, too, you are all throwing this black cloud over the U.S. Open. It's one of my favourite events. I don't know why you guys keep doing that.

The more legs you give it, the more you keep talking about it.

Q. Sorry to ask another question about it, but not sorry enough not to do that. In some ways it seems like they're offering something that would appeal to you. You're a guy who really gets up for the majors, really loves the majors. At the moment it seems like it would be an opportunity to play less in between the majors and still play the majors. Is that attractive to you, or do you prefer your current setup?

Q. Did Chase say anything about his experience over there in London?

BROOKS KOEPKA: I haven't talked to him. I watched a little bit of it. We had it on when we were practicing, playing 18 holes. We had it on the phone. I was just listening for when I heard his name just to watch him and see how he is doing.

Q. Is there a figure at which you would swap tours? Does that exist? Is it as simple as that?

BROOKS KOEPKA: I don't understand. I'm trying to focus on the U.S. Open, man. I legitimately don't get it. I'm tired of the conversations. I'm tired of all this stuff.

Like I said, y'all are throwing a black cloud on the U.S. Open. I think that sucks. I actually do feel bad for them for once because it's a shitty situation. We're here to play, and you are talking about an event that happened last week.

Q. Well, there's events that will be going on for the next foreseeable future.

BROOKS KOEPKA: I know, but you can't drive a car looking in the rearview mirror, can you?

END_OF_DOCUMENT_TOKEN_TO_BE_REPLACED

With an official announcement imminent, it seems Koepka will be driving that car(t) on the LIV Golf series of events, from now on.

LIV Golf, financed by the Saudi Arabian 'Public Investment Fund', have been called out by Amnesty International for human rights violations and practices in the gulf kingdom. Any PGA Tour golfers that teed it up at the first LIV event, earlier this month, had their membership suspended.