Only some players would have seen it, only the best would have pulled it off.

Aaron Mulligan saw it alright. He saw the gap, saw the goalie creeping forward, he saw Ballybay Community College to the Ulster title.

Ballybay Community College were in the O'Doherty Cup final against St Aidan's Comprehensive of Cavan on Wednesday and coming into the game, the Monaghan school knew that the performance of young Mulligan would be telling.

The school's captain was two years a Monaghan minor and last year his standout displays in the blue and white earned him an Electric Ireland minor star award. 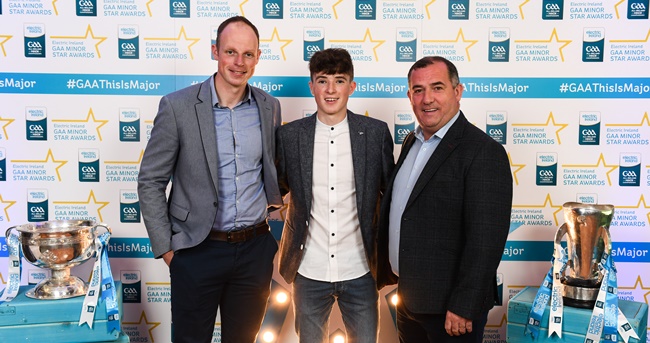 He's a cut above, he's different gravy and he's their key man who has the potential to go to town at this level. And on Wednesday afternoon he did laps of Clones.

St Tiernach's Park on a balmy afternoon and the young Latton O'Rahilly's hotshot delivered. He hit 2-7 for Ballybay Community College and all the way through the game he was operating on a different level to the students he was sharing the pitch with.

His second goal was the pick of the lot, with the rising star throwing a delightful dummy before catching the goalkeeper unawares. With the netminder drawn off his line, Mulligan spotted it within milliseconds and side-footed the most perfect curling effort off the undersides of the cross-bar and into the net.

It was poetry in its most flowing motion.

He ended his day with 2-7 to his name, but one of his goals was something ridiculous 🔥🔥

END_OF_DOCUMENT_TOKEN_TO_BE_REPLACED

Ballybay went onto win comfortably on a scoreline of 3-16 to 2-9, with the captain fantastic leading the Bally boys back to Ballybay with the fourth division Cup. Afterwards, Kieron Byrne of Ballybay Community College confirmed to us that Mulligan claimed meant it, having spotted the gap with a quick scan of the goals.

Look who popped in to #BCC for a visit today! Our former Principal Paul Flynn called to congratulate the U-19 victory, pictured with team captain Aaron Mulligan and the O'Doherty Cup #Community #Team@ulsterschools @monaghangaa pic.twitter.com/1nXEnrwuw0

We never doubted him for a second.


popular
If Twitter was around for 1994 Hurler of the Year farce, it would have been pure carnage
Alex Ferguson's dismissive comments confirm truth about Jordan Henderson
The SportsJOE 12 o'clock quiz | Day 286
QUIZ: Can you name the Scottish football cult heroes?
Wayne Rooney story about Memphis Depay shows why he failed at Manchester United
QUIZ: You have 30 seconds to answer this one tricky football question
"There were some tough battles but I was happy to test myself against the best"

You may also like
7 months ago
Umpire Garland taking learnings and criticism from behind the goals
11 months ago
You'd love to have Niall Kearns on your team
1 year ago
Magheracloone: Back from the brink
1 year ago
How Monaghan club recovered from losing it all in a tale of determination and unity
1 year ago
Ciaran Thompson's joke of a left peg shows Naomh Conaill can do it every way
1 year ago
Defenders do everything right yet Conor McManus kicks boomer off balance and off the left
Next Page