You'd love to have Niall Kearns on your team

Niall Kearns was presented with the man-of-the-match award but it was no consolation.

The man was sickened and he couldn't hide it.

Monaghan had ran Dublin ragged for the guts of an hour, ferocious tackling, powerful running, brave decision making and all but ultimately, they failed to close out their victory.

They put themselves in the driving seat, leading by seven points with 67 minutes of the game played and regardless of refereeing mistakes, should have had the game wrapped up and the two points on the road home.

Regrets, shock and a bit of bad luck too.

Dublin are never, ever beaten.

Banty is a man with a plan.

What a game of football 👏 pic.twitter.com/5P4sFG37NU

In the immediate aftermath, it was obviously going to be a difficult one to take for Banty's team and Kearns wore every bit of it as he chatted to Hugh Cahill on RTÉ.

Almost three minutes of over-time played. Conor McManus called back by Ciaran Branagan, as he scampered ominously toward Evan Comerford's goal. Kearns himself had a huge part to play in reducing the game's most ominous midfield pairing in Howard and Fenton, to mere spectators on their home patch.

The Farney were miles the better team out there, and it would have been sweet to have won a third game in a row against Dublin.

END_OF_DOCUMENT_TOKEN_TO_BE_REPLACED

But in the grand scheme of things, it won't matter all that much to Monaghan. This blow will not be season defining, they can kick on from here if they follow the lead of their spirited midfielder.

From minute one, the Sean McDermott's club man was throwing himself around Croke Park with force and abandon. He thundered into both Howard and Fenton in the early stages, as Monaghan laid down a vigorous and aggressive marker on this game.

They were simply hungrier than Dublin in the early stages, and nobody epitomised that hunger more than Niall Kearns who broke onto 60:40 balls as if the favourite was never ever going to win them. 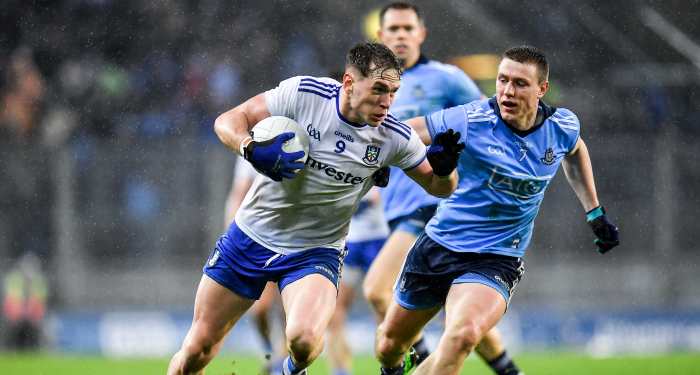 While many players are overwhelmed by the task of keeping players like Fenton or Howard quiet, and sacrifice their own game as a result, Kearns strode forward with the ball like a man who'd forgotten all about them. The 22-year-old plays the game on the front foot, and with a fair bit of intensity.

There was a passage of play in the second half which summed Kearns up. He darted onto a loose ball almost 45 yards out from the Dublin goal and through sheer power and strength, managed to beat two Dublin defenders to gain a sight of goal. He was unfairly called for steps but Kearns didn't remonstrate, just galloped straight back out to his station.

Monaghan will be disappointed not to have won the game but there are plenty of positives to take, none-more-so than the fact that they've a young midfielder who's as physical and as skilful as the best of them.

You'd love to have Niall Kearns on your team.


popular
If Twitter was around for 1994 Hurler of the Year farce, it would have been pure carnage
Alex Ferguson's dismissive comments confirm truth about Jordan Henderson
QUIZ: Can you name the Scottish football cult heroes?
Wayne Rooney story about Memphis Depay shows why he failed at Manchester United
The SportsJOE 12 o'clock quiz | Day 286
"There were some tough battles but I was happy to test myself against the best"
QUIZ: You have 30 seconds to answer this one tricky football question

You may also like
7 months ago
Umpire Garland taking learnings and criticism from behind the goals
1 year ago
Magheracloone: Back from the brink
1 year ago
How Monaghan club recovered from losing it all in a tale of determination and unity
1 year ago
Ciaran Thompson's joke of a left peg shows Naomh Conaill can do it every way
1 year ago
Defenders do everything right yet Conor McManus kicks boomer off balance and off the left
1 year ago
Penalties the name of the game but surely there's a better way
Next Page