It's hard to watch the St. Patrick's celebrations and not be jealous.

Club championships are a rare thing that will only be afforded to the lucky minority so, when you get your hands on one, treasure it. Caress it, kiss it, hoist it, love it.

It's difficult to explain to someone outside of the GAA why this struggle can consume someone's life. The fight to win a county championship defines many Irish men and women and yet most of them never get there. Perhaps we'll never find the words to explain or justify the physical and mental and emotional commitment it takes to embark on that journey just for the heck of it but the example of Peter Acheson using up all his annual leave days so he can fly over and back from Dubai to play with his club in the Tipperary football championship is a decent starting place to give someone a tangible example of the importance of club. 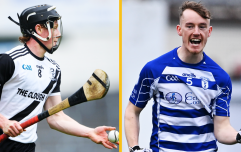 END_OF_DOCUMENT_TOKEN_TO_BE_REPLACED

On Sunday, St. Patrick's were put out of the Leinster championship after losing to Rhode. They could never have won in fairness after winning a replay of the Wicklow final just hours earlier on the Saturday.

That they had to play in the provincial the next day is Wicklow's doing - they were out of the inter-county football championship on June 9 and had the best part of five months to run off their club championship but getting screwed over in their Leinster bid did nothing to deter St. Patrick's joy.

After winning their first county title since 2012 and breaking the Rathnew and Baltinglass stranglehold on the cup, this occasion was going to be marked. So Ciaran Doyle lifted the trophy on Saturday thanks to points from two players, Stephen Duffy and Tommy Kelly, and they all went back out again the next day to take on Rhode and were inevitably undone with 10 points to spare. Sunday night was celebration time.

END_OF_DOCUMENT_TOKEN_TO_BE_REPLACED

When they got to Fitzpatrick's Bar, the whole club had bunged their way in to mark an unbelievable season, Leinster success or not.

And the scenes were simply incredible. With a St. Patrick's slant on 'Allez Allez Allez', the people went absolutely bananas for six minutes straight, jumping up and down and going wild for the same words.

They were standing on tables, tops were off, men were having their arses slapped, they were hugging, lifting the cup and bouncing around because this... this is what it's all about.


popular
Sean Dyche set to be named Everton manager after Marcelo Bielsa talks break down
Roy Keane flatly rejects longstanding perception of ex-Man United midfielder Paul Ince
Allianz National Football League Round 1: All the action and talking points
Roy Keane leaves ITV pundits in stitches after Pep Guardiola's pre-match interview
Conor McGregor hit by car ‘at full speed’ while cycling
Quiz: Identify these 15 football clubs that are not named after a place
"I don't like to fill my time that way" - O'Hora going his own way in an era of obsessives and covering all bases
You may also like
7 months ago
"I was starting to go red, thinking ‘oh my God, why am I not talking?’" - the frightening impact of concussion
1 year ago
Wicklow captain raises the roof with rip-roaring speech from the steps of the Hogan Stand
2 years ago
"If we can do the job on Saturday, then obviously that would be the pinnacle of it all"
2 years ago
QUIZ: Which is the correct GAA crest?
3 years ago
12 years a Wicklow star, newborn only drove Fusciardi on
4 years ago
Eight county games taking place and the last club weekend of the year
Next Page