"Why is he going for the top right hand corner?" - The GAA Hour break down Ryan O’Donoghue’s penalty miss

"I’m not sure if that really works in Gaelic, the same as it works in soccer."

Ryan O’Donoghue’s penalty miss in Saturday's All-Ireland final against Tyrone was a crucial moment in the game, and that's stating the obvious.

If it goes in then suddenly Mayo are in the lead, their tails are up, and there's a real sense of 'this is our day at last.'

END_OF_DOCUMENT_TOKEN_TO_BE_REPLACED

However, O’Donoghue misses, the Tyrone team get energy from that, and not long after they score a goal at the other end to really take the wind out off Mayo.

What isn't clear though, is the reasoning behind the forward's choice of penalty, as he opts to go right for the top corner.

Speaking on the GAA Hour, Colm Parkinson questions this choice.

"We have to talk about the penalty miss, like why is he going for the top right hand corner here? 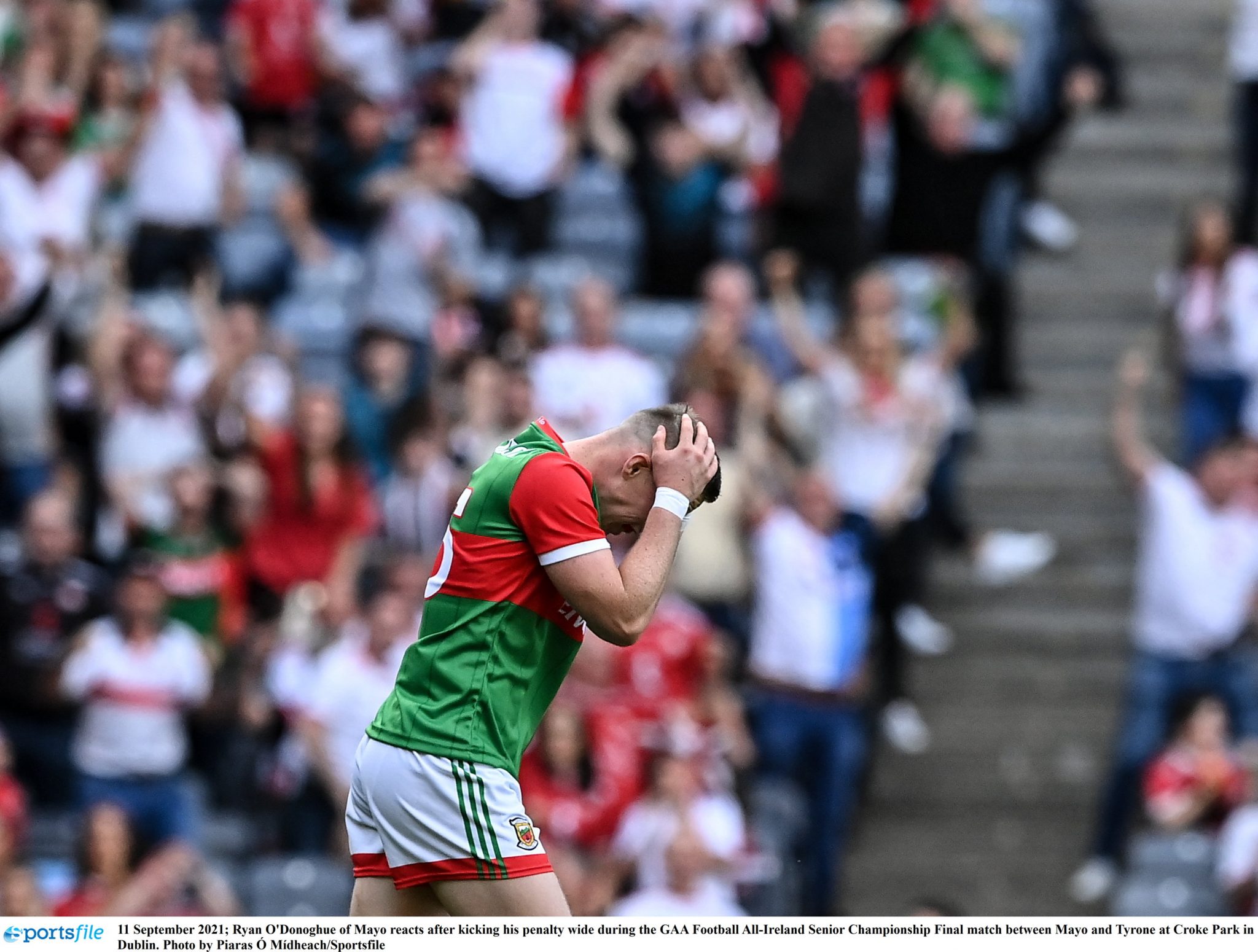 "If you ever go in and do these skills challenges, or you’re watching Soccer AM, where you get points for kicking it into goals. The top right is the highest, like it’s harder, you get two points for top right, you might get one point for bottom right or bottom left.

END_OF_DOCUMENT_TOKEN_TO_BE_REPLACED

"The penalty there is Diarmuid Connolly on David Clarke, he’s a right footed kicker, he’s whacking it your bottom left, it’s the go-to penalty when you’re under a lot of pressure and if you kick that hard enough into that bottom corner, no goalie’s getting it.

"Even David Clarke, who guessed right, couldn't get to Connolly, you know? Why choose the penalty with the higher degree of difficulty, under that pressure?"

Former Dublin star, Alan Brogan was also on the show, and he thinks O’Donoghue’s run-up was also an issue that lead to the miss. 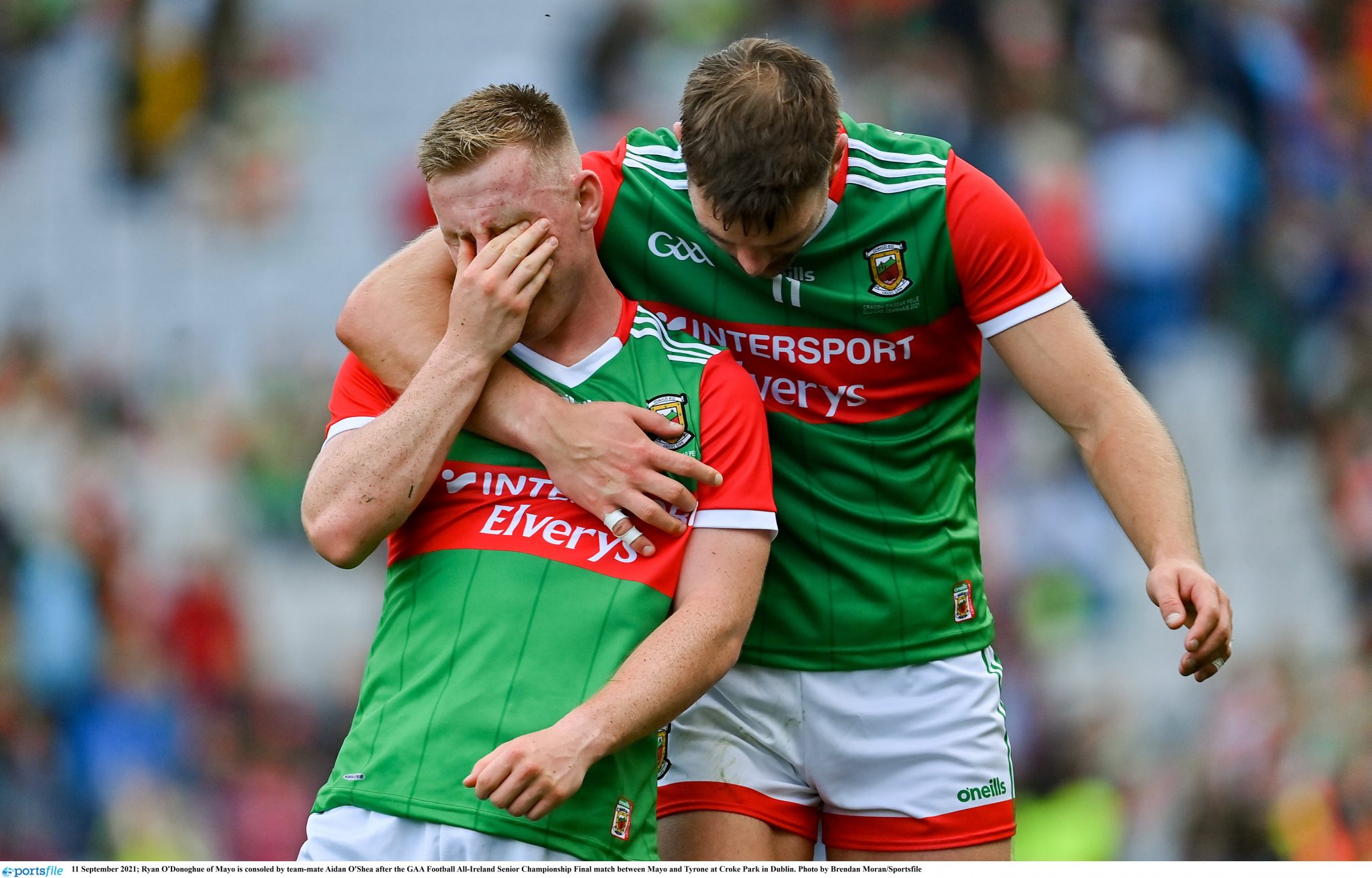 "Yeah, it was a strange choice considering it was such a high pressure moment in the game, even the run up and stuff, and the little side step and stuff, I’m not sure if that really works in Gaelic, the same as it works in... like a soccer goalkeeper tends to take a chance.

"I think a lot of the Gaelic goalkeepers stand and wait, to try and make a decision, whereas the soccer goalkeeper, the goal is a little bit bigger, feel they have to take a gamble on it.

END_OF_DOCUMENT_TOKEN_TO_BE_REPLACED

"And you can see it didn’t really fool Niall Morgan, he still went the right direction, Would he have saved it?

"If it went in the top corner, he probably wouldn't have saved it, but it was very high risk and for me, I think in a game like that, you just pick a corner, put it low and hard and as a right foot kicker, I always found that it’s easier to put it in the left.

"When you’re going with your right foot, to go the right side, you have to open up your body a bit and it just leaves a bit more room for error and look, it struck the post, it was unfortunate, but it was a crucial moment in the game and it was going to be a turning point either way.

"If you’d had that goal there, Mayo are really back in it, and I think Colm O’Rourke said in The Sunday Game last night, Mayo live off those kind of high emotional energy scores, and that would have been one of them at a real crucial stage of the game.


popular
Gearoid Hegarty's harsh red card leads to a heated debate in The Sunday Game studio
French media rave about Caelan Doris and 'Playstation rugby' from Leinster
Chelsea team-mates 'shocked' as Andreas Christensen reportedly refused to play in FA Cup final
Liverpool and Chelsea fans go viral after bizarre FA Cup final confrontation
Tailteann Cup draw doesn't pass without controversy as repeat-pairings and regional draws come under scrutiny
Pep Guardiola reveals what he said to Mark Noble during touching embrace
Real Madrid unveil new home shirt featuring iconic retro numbers
You may also like
3 days ago
"I enjoyed it" - Padraig O'Hora opens up on his battle with David Clifford in League final
4 days ago
The All-Ireland hangover is a real thing, Dublin's dominance just made us forget about it
4 days ago
David Clifford tells Darran O'Sullivan how handles all of the pressure and attention he receives
5 days ago
Three hurling games, one Ulster championship clash, and an u20 All-Ireland final on TV this weekend
6 days ago
Mickey Harte says 'it's nearly too late to market Tailteann Cup well now'
1 week ago
Andy Moran is 'disappointed with the way they set up' Tailteann Cup
Next Page