Kilkenny secured their 18th league title with a six-point win over Tipperary at Nowlan Park on Sunday as the Cats claimed their first Division 1 title since 2014.

TJ Reid led the way for the hosts with a brilliant 0-15 but Tipp half-forward John McGrath produced one of the moments of the match when he hauled in a long ball forward before turning Kilkenny corner-back Joey Holden and finding Jason Forde with a lovely pass to set up the opening goal of the game.

Kilkenny rallied in the second-half with Walter Walsh getting a goal back for the hosts after a brilliant pass forward from Conor Delaney.

The score gave Brian Cody's side a one-point advantage before Kilkenny then extended their lead to six a shortwhile later as Reid, John Donnelly and Bill Sheehan all pointed to give the Cats a commanding lead. 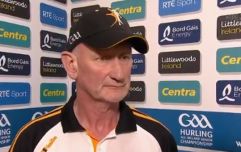 Brian Cody: You'd want to be very sure that was a red card

END_OF_DOCUMENT_TOKEN_TO_BE_REPLACED

Jason Forde and Reid traded scores down the stretch before Conor Fogarty found the back of the net with a brilliantly taken goal, only for Forde to fire back with a goal of his own.

The victory marked the fifth consecutive time Kilkenny defeated Tipperary in a League final as Cody added the ninth league title of his managerial career.

popular
Wayne Rooney story about Memphis Depay shows why he failed at Manchester United
You'll have to be a diehard fan to get 20/20 in this Liverpool players of the 90s quiz
SportsJOE 2000s Football Quiz | Round 11
The SportsJOE 12 o'clock quiz | Day 288
QUIZ: You have 30 seconds to answer this one tricky football question
"I did for one second think of flinging the boot at him" - Maher's journey an inspirational thing
In defeat, Jerry Kelly dies with his boots on in coming of age final display
You may also like
1 year ago
'It's everything we f*****g dreamed of' - Seamus Callanan interview
1 year ago
Henry Shefflin feels Richie Hogan's red card was 'harsh'
1 year ago
Ruben Davitt puts on an absolute clinic against Kilkenny
1 year ago
Report: Kilkenny lose key forward for All-Ireland final
1 year ago
JJ Delaney and Lar Corbett tell story of league final fight
1 year ago
Michelle Quilty scores 1-9 as Kilkenny march into another final
Next Page