There's a man getting ready to bulldoze his way through the Donegal defence.

Mattie Donnelly put on an exhibition of power in Belfast today when he destroyed the prowler push challenge.

The Tyrone man was at EFP Gyms headquarters for a bout of training and he didn't exactly take it easy.

Instead, they loaded up the prowler push with 100kgs and sent the Red Hand forward on his way for four lengths - 100 metres.

And he did it in just 1 minute 45 seconds. A new record set at the EFP showroom which is becoming a bit of a haven for these kind of challenges.

Before Christmas, boxing sensation Carl Frampton had us wincing at his outrageous monkey bar challenge attempt whilst former Derry footballer and one of the main men at EFP Gyms, Declan Mullan, performed the most almighty of hurdle jumps to show that they practice what they preach.

Now, Mattie Donnelly (in red in the video) absolutely ripped through this latest challenge.

There's a reason why he has a pretty decent gun show going... 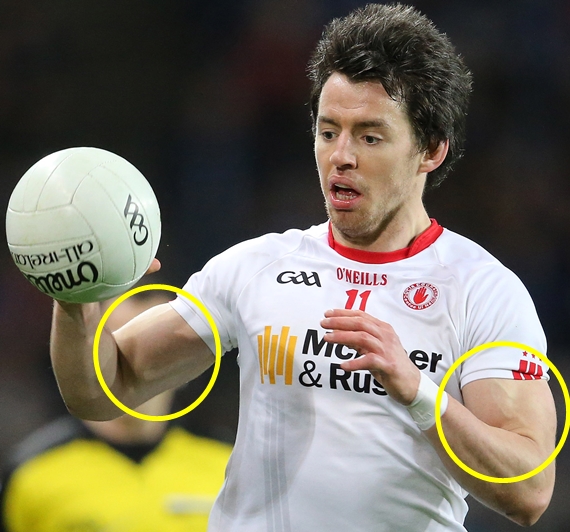 And there's a reason why his power marks him out on the field. Check out this bad boy.

popular
Jamie Redknapp's face after going toe-to-toe with Roy Keane as Matt Doherty caught in the crossfire
Referee Mathieu Raynal puts Sexton in his place after TMO mess
Robbie Henshaw one of three Irish players deserving of Lions Test XV
QUIZ: How well do you know Manchester United players of the 2010s?
Solskjaer hits out at "outside influences" on referees over Man Utd decisions
Ellis Genge reveals death threats received after England's loss to Wales
Sexton compares "brilliant" Irish debutant Craig Casey to Jonny Wilkinson
You may also like
4 months ago
"Just to get that Tyrone jersey on my back and playing with the lads, it has been amazing."
4 months ago
"Conor McKenna is a better addition to Tyrone than what Tadhg Kennelly was to Kerry"
5 months ago
GAA voices need to make more noise in fight against disjointed restrictions
5 months ago
Donnelly back with a bang as Trillick win the shoot-out
9 months ago
No club football for nine years but Canavan was always going to make it work
10 months ago
"I went out at 18, straight from school and that breaks many players"
Next Page