This is an interesting one.

Mickey Harte helps prepare his Tyrone team for games with a pre-match rosary and sometimes they even head to mass together.

You don't need to look too far nowadays to know that the whole of Ireland isn't the God-fearing nation that once united the entire island. The majority of people aren't making it to mass for half an hour on a Sunday never mind going through the decades of the rosary in their own time and a lot of the younger generations are still looking for something to believe in. 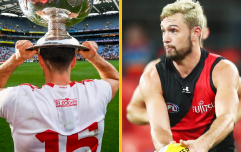 END_OF_DOCUMENT_TOKEN_TO_BE_REPLACED

To add to that, even if you are religious, you might not find it the most appropriate place in the world, bringing your prayers into what is essentially a battle. A battle that changes men. Sometimes a place where anything goes.

Then you have to consider that you have a group of individuals - probably at least 30-strong - and you're asking them all to engage in prayer when clearly this might be an issue for some of them.

It's genuinely a masterstroke that Harte is able to convince his panel to do this together and do it so close to games.

Imagine that dressing room - you have everyone from teenagers to guys in their mid 30s on the playing squad and you have boys and men with different life experiences and beliefs.

But the Tyrone manager is able to knit them together for a pre-match rosary.

Speaking to reporters after last year's Ulster championship triumph, Ronan McNamee revealed that the squad engage in religious ceremonies in the build-up to matches.

"[Mickey Harte] has a strong faith and naturally enough if you’re asked to do something, you do it," the full back said.

"Everybody pulls the same way, whether it’s saying the rosary or going to Mass.

"[The rosary] can’t do you any harm. I can’t imagine it’s going to cause anybody any upset. Whether we do it with Tyrone or not, I go to Mass every Sunday anyway."

McNamee says that every time the team are away - in Kerry or Dublin or wherever - they'd have mass on Sunday mornings before a game - and they'll have it in the hotel if they have to.

Perhaps it's not that big of an ask.

But you must expect that there'd be some objectives in a panel that size.

And, still, Harte manages to pull them together to sit in prayer for however long and, still, 15 years later, he keeps them winning.

McNamee said afterwards that the players don't want him to go anywhere. This is the respect they have for him. And the non-religious are happy to sit in prayer with him before the game.

Because clearly, when it comes to football, he makes up for it all anyway if you are not that way inclined.


popular
QUIZ: Can you name the sponsors of all 32 of these old county jerseys?
Shane Lowry on his Tuesday duels with Rory McIlroy at The Bear's Club
Roy Keane linked with Championship job to replace ex-teammate
Two Man United players led a furious half-time inquest into Manchester derby performance
"I think Wexford football is in trouble if something is not changed" - Banville criticises Wexford lay-out
Thierry Henry once humiliated teammates in training just to prove a point
"This is the darkest day for English rugby... the ship has sunk" - End of the road for Worcester Warriors
You may also like
3 months ago
Tyrone GAA in mourning following death of senior hurling star Damian Casey
3 months ago
"Even somebody as stupid as I am would get the hint" - Colm O'Rourke rules himself out of Meath job in classic O'Rourke fashion
4 months ago
"Discipline was not where it was last year" - McKernan says Tyrone must improve discipline against Armagh
4 months ago
Tyrone's animal of an U20 midfielder runs out over the Kerry boys in Portlaoise bull-run
6 months ago
Padraig Hampsey sent off for shouldering Cormac Costello onto the tarmac in Omagh
7 months ago
"What about the 10 or 12 who can't? What's left for them?" - Errigal Ciarán call for return to under-18 and traditional age groups
Next Page