"For him, it's two steps back and he's still pelting it the other end of the field" - Beggan learning from Ederson

Rory Beggan was first brought onto the Monaghan senior panel in 2011.

A tall, powerful goalkeeper, one of his main attributes was his ability to kick the ball far and long. Fast forward to 2019 and Beggan is an All-Star number one and though his distance and power from the tee are still strong points, it's his placement and his anticipation from the restarts that sets him apart.

Goalkeeping coach Steve Williams has played a huge part in that. The Welshman is a former Shelbourne net-minder and an esteemed goalkeeping coach with Dundalk and he's been involved in the Farney set-up for a number of years now.

He's had a huge impact on Beggan's game, as the Scotstown net-minder told Colm Parkinson on Thursday's GAA Hour Show.

"When I first was brought into the Monaghan senior team in 2011, Steve Williams was the goalkeeping coach at the time. Back then the kickouts were starting to change, it was mostly just kicking it down the middle.

"That was what my strong point was, it was a strong kick down the field. I didn't really have the technique or the run-up or anything to hit these short kick-outs," he said at the launch of Cúl Heroes. 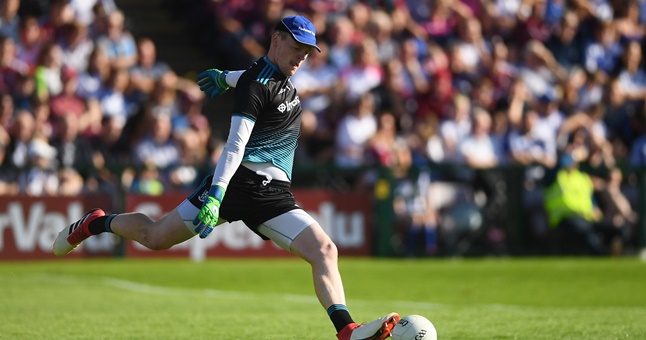 "I was just setting the ball down and going back ten or 12 steps away and then just picking a spot down the middle and kicking it..."

You'd see goalkeepers and even free-takers all over the country doing the same. The further you go and the faster you run the more power you'll have, right? Beggan has learned along the way that this isn't the case.

"You're running up and your focusing on a point on the ball, and you mightn't hit that point," he nods.

"I'd be watching Man City at the minute with Ederson at the minute, he stands beside the ball and tries to give whatever pass he can, but for him, it's just two steps back and he's still pelting it the other end of the field, no problem to him..."

It's all about the precision.

You can listen to the Beggan interview, and much more from Thursday's GAA Hour Show here.