All over the country, managers are dreaming.

The three man weave. They've been persisting with it for years to grunts and groans from their players. They haven't bowed to the pressure.

The whispers start and the heads shake. They've stayed loyal to their convictions.

END_OF_DOCUMENT_TOKEN_TO_BE_REPLACED

The manager is a dreamer. Admittedly, an ideal situation will be required for this drill actually to come off in a match but they hold out hope. One day.

Martin Lynch had his day of days on Monday. And what a day to have it. The Antrim club football semi final against Portglenone. It was less than a week ago when extra-time, free-kicks and a 10:36 finish couldn't separate these juggernauts in battle. 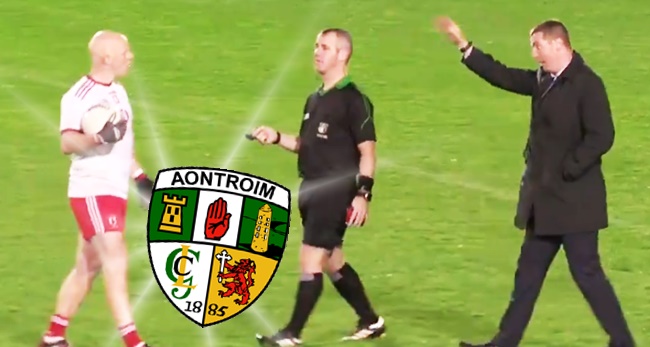 'Go live' For Antrim people who weren't at the Dub, that was the story of the night. The Antrim S...

On Monday, they went at it hammer and tongs again and after all that, the manager's courage of his convictions paid off. Lámh Dhearg's clinical execution of the three man weave had a huge say in it.

2-8 to 0-9 was the final score in the replay at the Dub, the Queen's University sports grounds, with two goals from that stalwart Paddy Cunningham the difference between the sides.

The first goal came just after half-time, a brilliantly taken effort from one of the best finishers around. The second one, only a couple of minutes later, was a real team effort that Cunningham got on the end of.

A turnover in midfield. Three forwards against three backs up top. It can only mean one thing.

The most controversial drill of them all. The drill that commentators have slated for years. The three man weave takes Lámh Dhearg towards the goals and it gives Paddy Cunningham the easiest goal he will ever score.

Lámh Dhearg are into the final. Only Cargin stand in their way now.


popular
Red cards, slips, heroes, villains and last second equalisers - Derrygonnelly's extra time win over Dromore had it all
Ruesha Littlejohn gate-crashes Katie McCabe's interview after another player-of-the-match display
GAA club transfers that shocked the county: Jason Sherlock
Here's all the GAA games on the tube this weekend as the provincial championship heats up
Jordan Larmour enjoys satisfying bit of revenge on Mack Hansen
Fermanagh footballer opens up about losing her mum to suicide and urges people to seek counselling
Roy Keane's three leadership tips he gave to Owen Farrell can't be argued with
You may also like
2 months ago
Antrim manager Enda McGinley backs league-based championship restructure
2 months ago
"I just knew that Karen was going to be there with us... I absolutely adored her" - Maeve Kelly
4 months ago
Laois rise to the occasion to relegate Antrim in an absolute thriller
5 months ago
Antrim Ladies Gaelic football team - The only Ulster GAA team with all-female coaching staff
5 months ago
Danny Sutcliffe catches puck-outs for fun as Kenny's plan comes good
6 months ago
"In hurling, the system really works. The Leagues are structured well and so are the championships"
Next Page