The Subiaco Oval is one of the most famous (and pleasing to pronounce) sports stadiums in the world and this weekend is set to host Ireland v Australia in the International Rules.

Irish teams and sportsmen have enjoyed varying degrees of success at the stadium over the years as its hosted previous International Rules matches (2003 and 2008) as well as the Lions just last year in a pre-Test warm up.

END_OF_DOCUMENT_TOKEN_TO_BE_REPLACED

The Ireland rugby side has also had a few visits to the venue known locally as 'the House of Pain' due to some lopsided results in the past.

We decided to bring you just a flavour of some Irish memorable sporting moments on the hallowed turf at the biggest stadium in Perth.

The last time Ireland played an AFL test at the Subiaco it was a classic and a game that is regarded as one of the best ever in the competition's history. 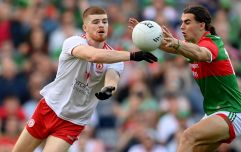 END_OF_DOCUMENT_TOKEN_TO_BE_REPLACED

Ireland led by 17 heading into the last 11 minutes of the match until the home side put on a powerful show to reel Sean Boylan's side in.

The final moments were tension filled with Ireland barely holding on when Paddy Bradley straight though on goal was 'Sean Cavanaghed' by Dale Thomas.

Johnny Sexton's first ever try in a Lions jersey

END_OF_DOCUMENT_TOKEN_TO_BE_REPLACED

Last year's Lions tour seems like a million years ago but not only did it mark the beginning of the end of Brian O Driscoll's career but it saw another Irish rugby player take his place among the world's best.

Johnny Sexton started in the famous jersey for the first time against the Western Force and it didn't take long to show his class.

We should see plenty of high fielding between Ireland and the Australian's and we just had to include this try from Ronan O Gara that features Shane Horgan's super catch and offload from the test in 2006.

The moment of magic was one of the few highlights in a 37-15 loss but we'll always have that almost telepathic Rog/Horgan teamwork.


popular
Ireland team to play Wales: Andy Farrell's XV, the big calls and bold cuts
Jaden Sancho can't hide his smile as Old Trafford give heartwarming reception
Everton release brutal 59-word statement to confirm Anthony Gordon departure
"Every team did it!" - Paul O'Connell on Roy Keane comment to Ronan O'Gara that he couldn't deny
Owen Farrell praises Johnny Sexton in revealing interview ahead of Six Nations
Discontent over Netflix access for Six Nations documentary as Johnny Sexton focuses on his Last Dance
"It's crazy to think Bundee Aki might come straight in and start against Wales"
You may also like
1 month ago
Olivier Giroud responds after claim he pretended he couldn't speak English to avoid jersey swap
1 month ago
Melbourne derby abandoned after goalkeeper is smashed in the face with bin
2 months ago
World Cup 2022: All the major action and talking points from Day Three
2 months ago
Bundee Aki reminded us all of his best qualities, on a night Ireland couldn't do without him
2 months ago
Matt Williams slammed for post-match take on Nic White being able to play on after head blow
2 months ago
"It's testament to the guy himself" - Peter O'Mahony pays tribute to Michael Hooper after mental health break
Next Page