It doesn't matter what sort of pundit Colm Cooper is. He's Colm Cooper.

RTÉ's announcement that the Gooch will join their football coverage for the championship summer was met with excitement in most places but it did raise a few eyebrows in some media circles just because the Kerry legend hasn't done many interviews before, never mind TV or analysis work.

The debate raged on The GAA Hour about whether or not this was an "old fashioned" approach by the broadcaster to just hire a big name but, listen, sometimes your name is so big that it's always a good idea.

If you were to draw a graph about which pundits the public would be happy to watch, they'd be judged on their name and, of course, on their actual ability to be a pundit. 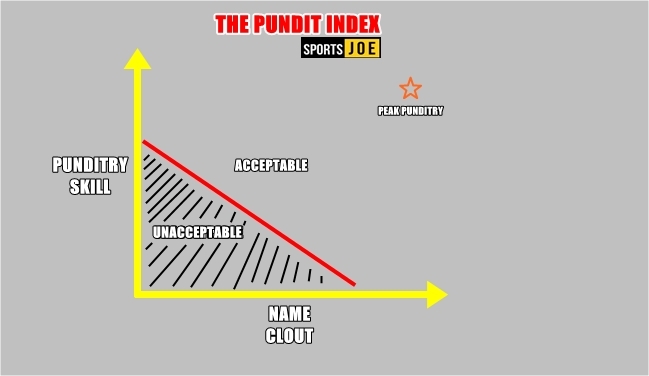 If your name is so good, it doesn't matter how much skill you have for the job, people will be interested to hear what you have to say and they will want to watch you - like Colm Cooper.

END_OF_DOCUMENT_TOKEN_TO_BE_REPLACED

Likewise, if nobody even knows who you are, it doesn't really matter so long as you know what you're talking about and you're illuminating things in the game that are of real value and interest for those watching at home.

Sky Sports fall into the trap all the time of going after a name but the name is never big enough to be deemed as 'acceptable'. Who really gives a shit about what Chris Kirkland has to say? If he was actually a good pundit, it would be a different matter but he's not so they're relying on his name but his name does not have enough clout. 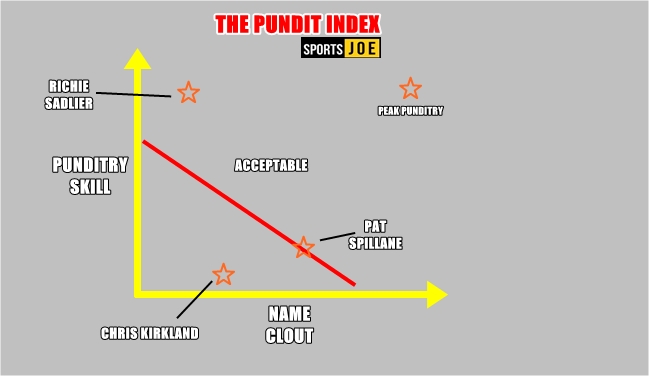 Pat Spillane is a footballing legend but he hasn't played for Kerry in 26 years and overexposure has lessened the effect of his presence. He's probably borderline of what the public want to watch but, right now, but Colm Cooper's name will have everyone tuning in.

And Steven McDonnell has a very interesting theory for what could be lined up for him in the wake of Joe Brolly daring to say that he wasn't the greatest of all time.

"Could it be coming off the back of Joe Brolly's comments against him?" the Armagh legend suggested on The GAA Hour.

"Maybe RTÉ are trying to spice things up a bit and put them on a show together."

There are certainly too few shows nowadays in any sport in any country that just pits two guys together to debate it out.

The one example we always harp back to is 1974 when Yorkshire Television pitted Brian Clough and Don Revie together to have it out in front of the cameras. We do nothing like that - we don't even let the pundits get into it.

Instead, everything is just moved on expediently - segment after segment, ad break after ad break.

Colm Parkinson was skeptical of how fair that challenge would be though, Cooper and Brolly sitting down together.

"Throwing Gooch onto a live TV show against Brolly would be just like throwing a lamb to the slaughter. That's completely unfair."

"I was surprised when I heard Gooch was going into punditry only because he did a show with us last year and he had no enthusiasm for talking about football!" he explained.

"We did a warm-up show in the AIB centre and it was more analytical, talking about Cluxton's kickouts and stuff like that and Gooch was bored to tears. Then, when we went to the Sugar Club, he really opened up because it was more about chatting about preparation for the All-Ireland finals, more fun stuff.

"I started thinking, on what basis is RTÉ hiring him? It's through no evidence of being an outspoken person - they're purely throwing money at him just because he's the Gooch and he's a legend. What kind of a business model is that?"

Cian Ward, however, can see where they're coming from.

"It'll work in the short term because everybody will be interested in what Gooch has to say," the Meath man said.

"He never did many interviews during his playing career so everybody's interested to hear, 'what sort of stuff is he going to see?'

"Obviously he can see the game in a certain way, he's a very player who picked up pockets of spaces so if he could give a small bit of insight, he could educate people. That's the capacity he has."

Listen to the full debate from 6.50 below.


popular
Roy Keane reacts to Brazil's jubilant celebrations in first half demolition job
World Cup 2022 Day 16: All the major action and talking points
Didi Hamann thought Brazil substitution was "disrespectful" to South Korea
Roy Keane handled Gary Neville’s goal celebration as most Irish fans would
World Cup 2022 Day 17: All the major action and talking points
Portugal boss could strip Cristiano Ronaldo of captaincy
Rory McIlroy explains 'falling out' with Shane Lowry that lasted a few years
You may also like
4 months ago
Finian Hanley take on contentious Kerry free may settle some Galway arguments
4 months ago
Darran O'Sullivan on the post-match gesture that shows what Jack O'Connor means to Kerry
4 months ago
JJ Delaney on how Brian Cody kept him grounded after Hurler of the Year honour
4 months ago
"We were known as stab city, the butt of everything. Of all the things JP has done, he has made everyone so proud to be from Limerick"
4 months ago
McCarthy still harder than a brick wall
4 months ago
"He was getting a bit disillusioned" - How Damien Comer rediscovered his fire
Next Page