Some stats are pointless, some don't tell the whole story. Some are indisputable though.

How much does your sharpshooter score? Simple as that.

He's there to rack up points, he's there to win games and he can be judged on how much he contributes on the scoreboard.

END_OF_DOCUMENT_TOKEN_TO_BE_REPLACED

Conor McManus is there to win the game for Monaghan - they don't need him winning ball and laying off or going out for breaks or decoy runs or any of that selfless stuff that he could do in his sleep. They need him to win games for them and, more often than not, he damn well delivers.

After the first round of Allianz Football League fixtures, the usual suspects have emerged - Dublin sit on top of the Division One, but the same guys are firing the same teams.

After game week one, the top scorers charts are making for interesting reading. 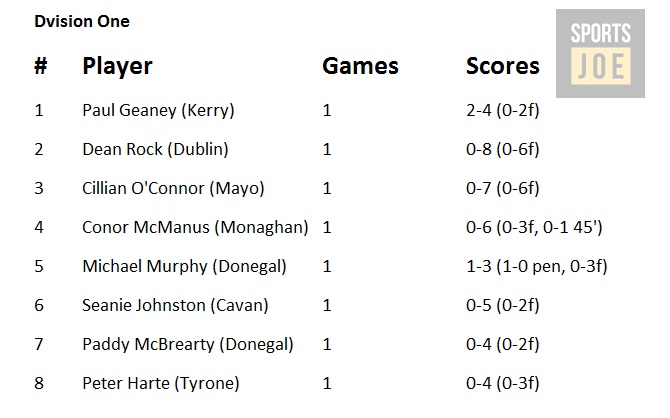 Paul Geaney's 2-2 from play helped Kerry to a fine victory in Donegal.

END_OF_DOCUMENT_TOKEN_TO_BE_REPLACED

The Kingdom were actually nine points to the good with 15 minutes to go but didn't score thereafter and their hosts reduced the deficit to three.

McManus pulled a McManus as Monaghan won in Mayo whilst Seanie Johnston's breathtaking performance wasn't enough to keep Cavan any closer to Dublin. 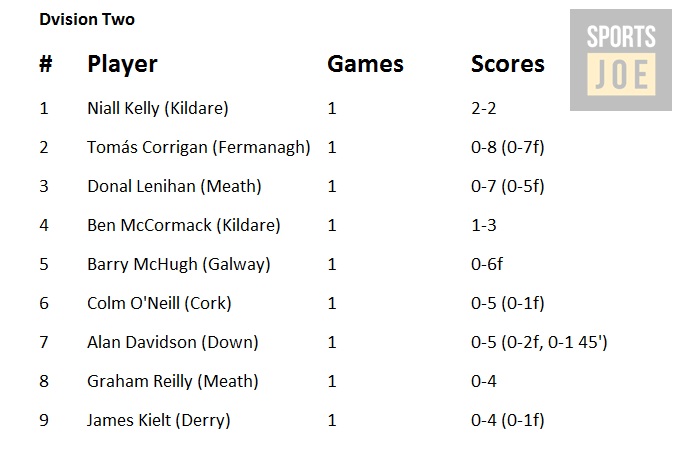 Colm O'Neill got 25 minutes against Galway - 25 minutes - and he scored five points, four from play.

Niall Kelly and Ben McCormack ripped Meath apart themselves. Honourable mention for Donal Lenihan who still managed to feature in the face of a 10-point defeat.


popular
Red cards, slips, heroes, villains and last second equalisers - Derrygonnelly's extra time win over Dromore had it all
Divock Origi to the rescue after Diogo Jota's absolutely incredible miss
Ruesha Littlejohn gate-crashes Katie McCabe's interview after another player-of-the-match display
GAA club transfers that shocked the county: Jason Sherlock
Here's all the GAA games on the tube this weekend as the provincial championship heats up
Fermanagh footballer opens up about losing her mum to suicide and urges people to seek counselling
Roy Keane's three leadership tips he gave to Owen Farrell can't be argued with
You may also like
2 weeks ago
Brian Fenton on Stephen Cluxton, Paul Mannion, and Dublin's transition phase as former stars retire
2 weeks ago
"You wouldn't have these lads on a massive pedestal" - Lahiff not standing back to admire
2 weeks ago
Dublin magician lights up county final with a sensational selection of points
3 weeks ago
Ian Garry on the message he received from Dublin GAA star before his UFC win
2 months ago
“It’s a hard one to even put words on now. I haven’t even fully digested it."
2 months ago
"I do think Dublin were complacent, you could even see it in their play" - Briege Corkery
Next Page