If you aren't getting enough of a fantasy football fix from doing horrendously badly in your work league and you still have Simon Mignolet or Daniel Sturridge in your team, then maybe GAA might be more up your street.

The Leinster Council are looking for hurling and football fans to take part in their own unique version of fantasy GAA with the most Irish sounding prize ever on offer for the winner.

Not only will you get the honour and distinction of being the GAA brain of your parish with your in-depth knowledge of that as yet undiscovered Kilkenny minor who's the next Tommy Walsh, but you can also expect to be nice and toasty for a long, long time.

That's because the prize for picking the best five performing GAA players each week across Leinster action will win a ton of briquettes from O'Byrne Cup and Walsh cup sponsor Bord na Mona. That's right, one whole ton of top quality peat.

The games included are this Sunday's final between Kildare and Dublin while the Walsh Cup final will also count on the February 7th as well as games in the Leinster Hurling and Football Championships.

You'll rack up scores when the Diarmuid Connolly or TJ Reid in your side notches goals or points, but any black,yellow or red cards will see you lose ground on your rivals. 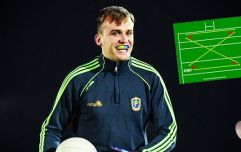 END_OF_DOCUMENT_TOKEN_TO_BE_REPLACED

You'll also get points for defenders who score while keeping a clean sheet will also help you gather points for the whole team. The deadline for changing your team is up to five minutes before throw-in so any late changes (and being GAA there will be late changes) in the dressing room can be worked into your starting selection.

It's just a wild guess but Kilkenny and Dublin players should prove popular.


popular
Rory O'Connor gets Wexford out of jail as Shanagher throws it back
Conor McGregor sends message to new UFC lightweight champion
Alisson gives moving post-match interview after scoring late winner for Liverpool
The SportsJOE 12 o'clock quiz | Day 352
QUIZ: Can you name these La Liga cult heroes?
'Stop, stop, STOP!' - Texas crowd left stunned as UFC legend has arm snapped
Burnley report Leeds' Ezgjan Alioski over gesture made towards Dwight McNeil
You may also like
2 years ago
Eight county games taking place and the last club weekend of the year
2 years ago
"It descended into a bit of a farce" - Brian Carroll sums up craziest game of hurling in a long time
2 years ago
The draws for next round of All-Ireland club hurling
2 years ago
The draws for next round of All-Ireland club football
2 years ago
Rathnew dethroned in Wicklow after late drama at Aughrim
2 years ago
Laois player wrote out 14 targets for year in October, met 10 by July
Next Page