Gleeson was dismissed after receiving his first yellow card for a skirmish with Tipperary forward Seamus Callanan before receiving a second yellow card for taking down Patrick Maher while he was baring down on goal.

McGrath couldn't believe Gleeson was shown his first yellow card for what he described as the midfielder being very hard done by.

“That was nothing, at best [it was] a skirmish between two players on the edge where we want to see people,” said McGrath on the Sunday Game.

"Conor has been very hard done by there in terms of the yellow card. If that’s a yellow card we might as well give it up."

'At best it was a skirmish between two players' - Derek McGrath felt Conor Gleeson's sending off against Tipperary was very harsh #rtegaa pic.twitter.com/wMynhY2rWa

He continued: “Between the 32nd minute and the 51st minute, Waterford rallied as is often the case when a guy is sent off.

“They got it to 0-20 to 0-17, so in terms of a turning point at that time, you couldn’t argue that Waterford were in pole position. You’d have to say that Tipperary were outplaying, [and] out-thinking us all over the field.

But definitely, [it was] the catalyst for a better performance. It enabled us to dig in until the 51st minute.”

"He knew Bonnar was baring down on goal and he took him down rugby style almost. That's a yellow. But if the first incident is a yellow card then god love us with what's gone on during the week there with wired up umpires calling referees." 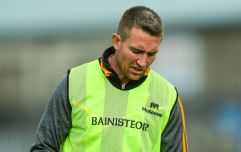 END_OF_DOCUMENT_TOKEN_TO_BE_REPLACED

Earlier this week, the GAA’s National Referees Committee issued new guidelines and instructions to all intercounty referees in an effort to clamp down on head-high and dangerous tackles in both football and hurling.

It was made clear that referees will be paying greater attention to the high tackle and the “illegal charge/collision” in both codes.


popular
The SportsJOE 12 o'clock quiz | Day 135
The SportsJOE 12 o'clock quiz | Day 134
It was Pierre-Emerick Aubameyang's final but Emiliano Martinez's moment
"I was around the place like a Jack Russell, snapping at all the big guys"
"Me and him used to room together, and he was a bit of a nightmare"
"It's not about winning at underage. It's about building players and building people"
The SportsJOE 12 o'clock quiz | Day 133
You may also like
1 year ago
"If there's a day when Davy would roll the dice, it might be Sunday"
1 year ago
“It was controlling Dan Shanahan as much as anything else”
1 year ago
Corbett & McGrath's Big Build-Up is here - our new hurling analysis show
2 years ago
Derek McGrath's great insight into the ruthlessness of Micheál Donoghue
2 years ago
One of Derek McGrath's biggest regrets as Waterford boss will hit home with many players
2 years ago
Derek McGrath is at it again with touching gesture to retired referee
Next Page