Years of dedication, mountains of preparation and a far-fetched dream of joining the big boys came true for Kildare hurling on Tuesday night, as their U20 hurling team pulled off one of the shocks of the year.

Not only did the Lilywhites defeat a fancied Wexford side in the cauldron that is St Conleth's Park in Newbridge, they did so with 13 men and they did it in sensational style, as their free-scoring forward Liam Dempsey hit a brace of points in the 7th and 8th minutes of injury time to send the place wild. 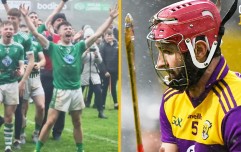 END_OF_DOCUMENT_TOKEN_TO_BE_REPLACED

It was fitting that this rip-roaring game finished with a tour-de-force from the Éire Óg Corrachoill forward because it was his 0-13 (0-11 frees) that kept the scoreboard ticking for the home side and kept Wexford chasing their tails throughout. Despite a lightning start which had Kildare leading by 0-6 to 0-2 by the first water-break, you would have had to think that a 27th minute red card for midfielder Harry Dunne would have took the sting out of the underdogs but instead it spurred them on.

The sharpshooting Darragh Melville scored a fine point and with Wexford giving away free after free, that was the trap door and for Liam Dempsey, this was like handing candy to a baby. He stepped up, he nailed the placed balls like a dead-eyed assasin and even though the second half had another Kildare men sent off, the 13 men were undeterred and they were unstoppable.

Wexford looked like they had done enough when they took the lead in injury time but that was when Liam Dempsey had one more spiritual awakening. The scenes were like something Newbridge has never seen.

Liam Dempsey shouldn't have to buy a pint in Kildare for ten years!

The man scored two points in the 6th and 7th minutes of injury time to stun Wexford and to send St Conleth's Park wild in the Leinster U20 championship 🏳️pic.twitter.com/fBbnX85bv1

What makes Kildare's achievement all the more remarkable is that Wexford won the 2019 Leinster minor title and were tipped for big things yet again. Kildare had other ideas and their players and management will be smiling for the rest of the week.


popular
"It’s hard not to respect Johnny, even if you don’t like him!" - Dan Biggar
Martin McHugh: Them lads were stronger than the modern day player who's lifting weights all the time and doing no manual work
Quiz: Which footballer has played more times for Ireland?
"I was in the Blackrock end goal looking up to the heavens saying, "Get us through it" - Kerins following his late father's footsteps
Sky Sports presenter explains why Roy Keane and Graeme Souness are so critical of players
Dessie Farrell set to cut large chunk of Dublin players as panel is reduced for league campaign
Eddie Jones shares great tale on hour-long chat with 'inspirational' Roy Keane
You may also like
1 month ago
"That’s all bullshit. It's the best motivation you can get" - Leacy defying the odds
3 months ago
Galway fans' frosty reception for Davy Fitz doesn't make any sense
4 months ago
Super Sunday in store as county final season is here
4 months ago
GAA's first graphic novel focuses on a Wexford win that has yet to be matched
5 months ago
Davy Fitzgerald steps down as Wexford boss after five years in charge
6 months ago
'Davy Fitz loves to play the victim when it suits... Always the victim, never your fault'
Next Page