There is no love lost between Kilcar and Naomh Conaill and long story short, things started to turn icy around August 2021.

With Covid having put the 2020 county final on the long finger, it was only a couple of months ago when the decider took place but that was far from the only unusual thing about it. To this date, a shadow hangs over the game because even though the Glenties club lifted the trophy, their name isn't yet in the history books.

That's because, despite winning the game by virtue of a penalty shoot-out, Kilcar found a way to spoil the party. With Naomh Conaill having used one substitute too many during the extra-time period of the game, it was a week later when their opponents launched an objection into the result which ever since, has resulted in a bitter back and forth of appeals and more appeals and re-appeals to the extent that it's more two months on, and the whole thing hasn't yet been solved.

END_OF_DOCUMENT_TOKEN_TO_BE_REPLACED

In the mean-time, with Naomh Conaill having overcome Gaoth Dobhair last weekend and with Kilcar having hammered MacCumhails, you guessed it, the clubs will meet this Saturday in what promises to be a fiery and feisty 2021 county semi-final.

It's no secret that in Naomh Conaill, having been caught out by a loophole, they aren't best pleased with Kilcar's behaviour and have, at times over the last few weeks, taken the moral high ground over their rivals.

Hopefully Portugal made too many subs and we can appeal it 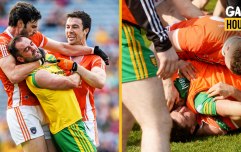 END_OF_DOCUMENT_TOKEN_TO_BE_REPLACED

From that perspective, Kilcar will be eager to vindicate themselves while Naomh Conaill will be looking to consolidate their supremacy. On top of the bite and tension that will inevitably make its way to O'Donnell Park Letterkenny, there will be also a whole host of top class footballers on show from Paddy McBrearty and Ryan McHugh (Kilcar) to Ciaran Thompson and Leo McCloone (Naomh Conaill.)

That game takes place at 1.45 on Sunday and will be live on TG4.

GAA on TV this weekend


popular
Gearoid Hegarty's harsh red card leads to a heated debate in The Sunday Game studio
French media rave about Caelan Doris and 'Playstation rugby' from Leinster
Chelsea team-mates 'shocked' as Andreas Christensen reportedly refused to play in FA Cup final
Liverpool and Chelsea fans go viral after bizarre FA Cup final confrontation
Tailteann Cup draw doesn't pass without controversy as repeat-pairings and regional draws come under scrutiny
Pep Guardiola reveals what he said to Mark Noble during touching embrace
Real Madrid unveil new home shirt featuring iconic retro numbers
You may also like
2 months ago
"Two shots at point more like" - Clifford flukes one as Kerry make light work of Donegal
3 months ago
Erratic to pure grace: How Paul Flynn perfected his kicking is a lesson for every player
3 months ago
"I missed two senior championship games in the Gaelic and it was eating me up inside" - Bradley-Walsh getting a lot done
3 months ago
Martin McHugh: Them lads were stronger than the modern day player who's lifting weights all the time and doing no manual work
6 months ago
McBrearty has dramatic equaliser ruled out as Naomh Conaill win Donegal grudge game
9 months ago
"We haven't lived up to it to be honest. We don't have any excuses really."
Next Page