That was a sweet one for the Dublin ladies.

The Dublin ladies lifted their second Brendan Martin Cup in a row on Sunday. A powerful performance saw them edge Cork with five to spare in the thrilling Croke Park finale.

Mick Bohan's side put on a spectacle for the 50,141 in attendance with their direct running, slick kick-passing and accurate shooting the difference on the day.

Half back Sinead Finnegan was on The GAA Hour podcast on Monday and she had plenty of praise for that man Bohan. He had managed the Dublin ladies to an All-Ireland final in 2003, and he returned for his second spell at the helm prior to the 2017 season.

Since then, the Sky Blues have won two championships and a League title with Bohan's imprint on the team clear. Finnegan sang the praises of the team's bainisteoir, claiming that the emphasis he places on the specifics of their game has had led to their huge improvements. 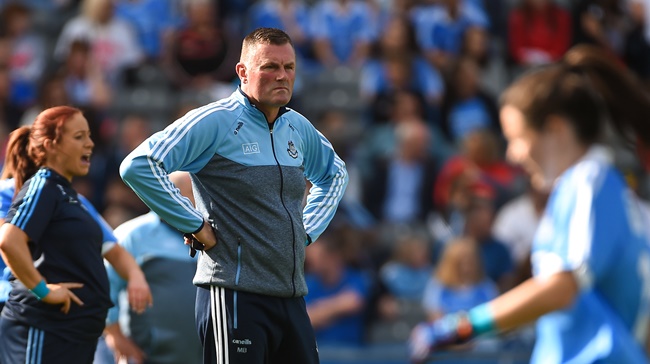 One of his main points from his very first training session was to ensure every player was confident kicking off both feet. This has come to fruition over the last two years and it was highlighted on Sunday, with Dublin's kick-passing a cut above Cork's, and their finishing lethal too.

"It's credit to the work that Mick has done," began Finnegan.

"We're all comfortable kickers of both feet now, something we definitely weren't when he first came on board. From the very first day he came in it was something that he worked on...Two years on, it's something we're still doing, the forwards work really hard at the end of every training session, they're out doing extra kicks." 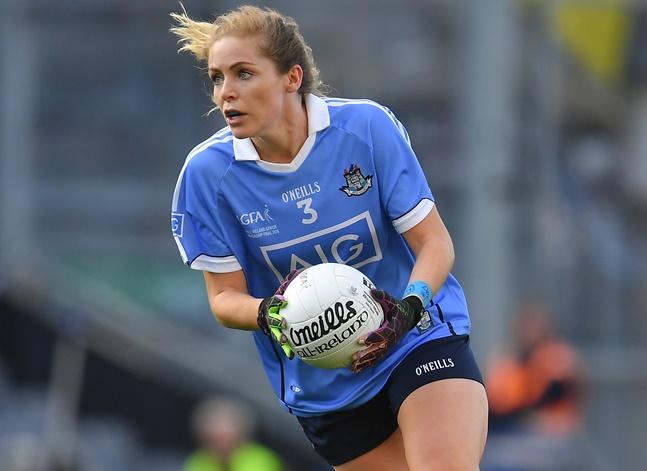 END_OF_DOCUMENT_TOKEN_TO_BE_REPLACED

With Carla Rowe kicking a goal in last year's final off her right foot, and two this year off the left, it goes to show that this practice is paying off.

And the victory was a particularly sweet one for Finnegan, who was forced off early in the 2017 triumph.

"That kind of felt like my All-Ireland final because the only ones that I'd played in I'd only ever had defeats, in 2014 and 2015 against Cork, and last year I only stayed on the pitch for 18 minutes or something like that. So to play the whole game was great," she said.

The celebrations were even sweeter, at the banquet that night, and in Dublin the next day.

"It was brilliant. If you win, it's such a special night. There was a good few of my family there, there were 14 or 15 of us there. It's a good way to say thank you to them after the year. They've been there since the very start, they've been there through the bad times and the good times, and when you get to celebrate the good times with them, it's so goof.

"We've all assembled in The Boar's Head. We're having a few pints with Hugh in here, it's great craic. One of the girls just arrived with the guitar so I'm sure there will be a bit of a sing-song soon," she added. 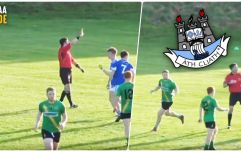 END_OF_DOCUMENT_TOKEN_TO_BE_REPLACED

The Boars Head pub off Henry Street seems to be the spot for Dublin GAA, with the footballers also celebrating their Sam Maguire triumph there a couple of weeks earlier.

Seeing as it's owned by a Cavan man, it's difficult to know where the link came from but it's a tradition now and it's there to stay.

Some craic on Capel St in #DublinTown right now as the all Ireland winning champions continue their tradition of celebrating with Hugh in the @boarsheaddublin the morning after the win! #dublingaa #COYBIB #dublin pic.twitter.com/m0f1GNSGld

It's the place to be when Dublin win.

You can listen to the Finnegan interview and much more from Monday's GAA Hour Show today.


popular
"There's times I do think I probably have let people down but in fairness, I have got good support from back home"
Goal disallowed in Dublin SFC because player wasn't wearing his gumshield
The SportsJOE 12 o'clock quiz | Day 138
The SportsJOE 12 o'clock quiz | Day 137
"That's a risk I'd be willing to take" - Byrne ready and raring for a championship
"I was asked to be the team doctor. I thought well I'll never play senior camogie for Galway"
All hail Alexis Sanchez, the man who played Manchester United like a piano
You may also like
2 weeks ago
The former Dublin minor star that led Ireland to Grand Slam glory
1 month ago
No promotion or relegation in Dublin championship in 2020
2 months ago
Seven-time All-Star Goldrick using time off to strengthen and improve
3 months ago
No fear of McCarthy losing a lifetime of fitness
4 months ago
"Sometimes sport can overwhelm you, it was time for him to take a deep breath"
4 months ago
Dublin hurler Mick Carton back on the mend after winning another battle
Next Page