Shane Lowry has received a standing ovation at Croke Park before Saturday's All-Ireland hurling semi-final between Kilkenny and Limerick.

Lowry won the British Open last weekend with a six shot lead over second placed Tommy Fleetwood to claim the first major win of his career.

The Offaly native and former Clara forward got a huge round of applause when his score was shown on the big screen at Croke Park during the Donegal and Kerry Super 8's match. 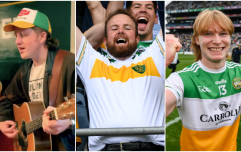 END_OF_DOCUMENT_TOKEN_TO_BE_REPLACED

Lowry banked a winners' cheque of €1.7 million for his win at The Open. He has also earned exemptions at the tournament until he is 60 and at the Masters, US Open and PGA for the next five years.

Earlier this week saw Lowry climbed to his highest ever placing in the Official Golf World Rankings after gaining 160+ ranking points since January which saw him shoot up the charts.

As of today, Lowry is ranked 17th in the world.


popular
The most Stone Age tackle you've ever seen gets South African lock straight red card
Galway fans' frosty reception for Davy Fitz doesn't make any sense
"Johnno went, 'We’re not moving! You're trying to mess us about!'" - Ben Kay recalls red carpet controversy
"Some of the generals wanted me executed" - Irish rugby legend on flag caper that went wrong
Neil McGee hasn't worked in eight weeks after back injury but still won't rule out championship return
'Brian was a genius... he would've killed you to even win a game of touch'
Wallabies star bounces off Duane Vermeulen like a brick wall, gets yellow-carded
You may also like
1 month ago
McIlroy and Lowry right in the mix for Olympic gold in Tokyo
3 months ago
An hour before his final round at the USPGA, Shane Lowry was texting Michael Duignan about Offaly
3 months ago
What Lowry and Harrington's super Sunday means in prize money, ranking and Ryder Cup points
3 months ago
Phil Mickelson makes golfing history as Irish boys make late run
5 months ago
"It's pretty shit for me, to be honest" - Shane Lowry on Irish quarantine uncertainty
1 year ago
Shane Lowry outshines Patrick Reed and Paul Casey with stunning round
Next Page