One of those 'where were you' GAA moments.

The St Mary's Cahersiveen man will forever be remembered for the swerving missile that followed and any time his name is breathed these days from Kerry to Dublin and everywhere in between, the minds and imaginations of Gaels will turn to that famous strike.

Nowadays, Maurice Fitz is actually on the sideline as a Kerry selector but there's a new kid taking centre stage.

Sigerson Cups, the National League, you name it - anything that Sean O'Shea has set his mind to this winter and the Kenmare kingpin has absolutely dominated it.

He was the player of the Electric Ireland Sigerson Cup for UCC but even more importantly for Kingdom folk has been the way he's taken to the famous green and gold jersey this year.

Peter Keane's Kerry have won each of their five games in the League to date and for every single one of them, their number 11 has been to the front and to the centre of it.

Routinely, he's racked up points in the double digits and whenever he's not slotting rakers of frees with nerveless composure he's been giving defenders exactly what they don't want to face with sidesteps from the Gods and pace to burn.

And once he gets a yard, he'll smile as he finishes you off.

Sunday was just another one of those days. O'Shea hit 0-8 as Kerry eventually saw off Monaghan with a late, great surge.

The pick of the bunch for O@Shea was his stoppage time peach right from the Maurice Fitz textbook.

Seán O’Shea lands a class point from a sideline for @Kerry_Official pic.twitter.com/ARBmLpXde4

You can watch that beauty in all its glory in this video captured by Kerry fan Brian Phelan here.

He lines it up. 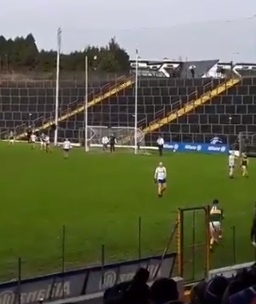 He takes it out. 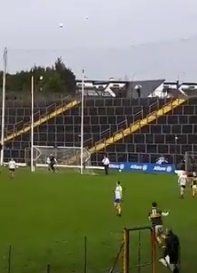 That's what Seanie O'Shea does.

popular
The SportsJOE 12 o'clock quiz | Day 139
"There's times I do think I probably have let people down but in fairness, I have got good support from back home"
Goal disallowed in Dublin SFC because player wasn't wearing his gumshield
The SportsJOE 12 o'clock quiz | Day 138
The SportsJOE 12 o'clock quiz | Day 137
The Champions League has changed its substitute rules for next season
Premier League referees to use pitch-side monitor for VAR next season
You may also like
1 month ago
"He was a nightmare to play against...you were just a sitting duck"
3 months ago
Closed doors no issue for O'Brien
4 months ago
"I'd play 18 holes of Pitch n Putt" - Jack O'Shea's All-Ireland final prep pure class
4 months ago
St Patrick's day memories: Rural Caltra with one of the great underdog triumphs
5 months ago
"I was kind of going 'I'm not a Kerry player" - Donaghy's story a brilliant watch
5 months ago
Mayo issue update on crunch Allianz Leagues clash with Kerry
Next Page