Sean Cavanagh was not standing for that.

"Can I shock you with a statistic," Pat Spillane began. The next two minutes made for great TV viewing.

Cavanagh and Spillane went at it during the half-time analysis of Tyrone's Ulster Senior Football Championship semi-final win over Donegal, at Brewster Park. END_OF_DOCUMENT_TOKEN_TO_BE_REPLACED

Cavanagh was praising Tyrone's fight half effort against Donegal, and likened some if their tactics to that of their old, long-term manager Mickey Harte. Spillane, his fellow RTÉ pundit, bided his time until he pounced on a phrase uttered by the former Tyrone star.

"You said, 'Mickey Harte's teams got a lot of stick, at times'. Of course they did! Sure they haven't won an All-Ireland in 12 years. 12 years.

"I would have liked if Mickey had transitioned to a more attacking style of football, but the lads here today have the opportunity to do that."

Spillane was not finished. "It got stick, justifiably," he chipped in.

"I would agree with that Pat," Cavanagh replied. "But at times it worked for us. We won plenty of Ulsters."

"But no All-Ireland," Spillane shot back, drawing this response from Cavanagh:

"Look, Kerry has beaten Waterford and Clare to get out of Munster, but we had to fight our way through Ulster."

That last statement from Cavanagh drew a sigh from the Kerry legend, but he has a point. It is easy to pontificate about how good have been in the last dozen years when they have rarely been given tests down in Munster. The Ulster championship, meanwhile, is a snake-pit. 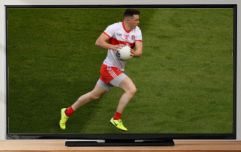 END_OF_DOCUMENT_TOKEN_TO_BE_REPLACED

Sometimes you have to cut your cloth accordingly.

Following the game, which Tyrone won 0-23 to 1-14, Cavanagh aimed another jibe at Kerry having it easy in Munster.

"Kerry have already won the All-Ireland," he quipped. "Sure they won by 4,000 points the other day."


popular
The JOE Friday Pub Quiz: Week 253
Cormac Egan's interview after Offaly u20s beat Dublin is everything that is pure about the GAA
After seven years in charge, Armagh have a big decision to make on Kieran McGeeney
Pre-match rituals - What it's like in the Croke Park changing rooms before a game
Absolutely no doubt who was the top pundit of Euro 2020
"Any team I've been involved in over the last five years, they've been way above their station" - GPS stats gone too far
Thomas Tuchel gets a hurling lesson as Chelsea touch-down in Carton House
You may also like
4 hours ago
Paul Pogba might leave Man Utd. No, *really* this time
1 day ago
Marcus Rashford hits back at claims he "benefits commercially" from charity work
2 days ago
Marcos Rojo wields fire extinguisher amid tunnel brawl after Boca Libertadores defeat
3 days ago
Everton make statement as player suspended pending police investigation
1 week ago
Footage surfaces of Southgate asking Rashford, Saka and Sancho to take their penalties
1 week ago
Jadon Sancho writes emotional first statement since England's Euros defeat
Next Page