The Mullingar Shamrocks corner back scored what they're calling one of the goals of the century in the Westmeath senior football championship on Saturday night. It was a goal so good that you couldn't even pull them up for exaggerating.

We hear of corner backs kicking points and scoring goals the whole time these days, such is the fluid and position-ignorant nature of the modern game, but Dillon Matthews did not find himself in scoring territory, he did not find himself on the end of a flowing team move. He found himself about ten yards up from his corner back base and from there, when he ran onto a hand-pass from his fellow defender, the marauding mad-man did the rest himself. 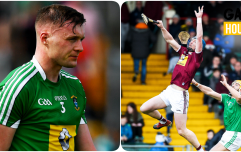 END_OF_DOCUMENT_TOKEN_TO_BE_REPLACED

Matthews put the foot down to leave the first tracker chasing shadows and across the way, midfielders didn't even have the time to think about tearing after him. It was already too late. One gallant half forward made a spirited burst and even though he stayed with him, he couldn't get close enough to him. Matthews, like a steam-train in full-flight, was burning oil at this stage to the extent that the referee tripped over himself trying to keep up.

The best was yet to come.

The run was spectacular, it was like Michael Donnellan in '98 but the finish, under pressure, off the left and into the goalie's top corner was even better. More importantly, it was a goal that inspired the Shamrocks to a four point win over Killucan and, indeed, it was a goal that nobody present in Cusack Park will ever forget.

You know a lad is fast when the ref buckles himself trying to keep up with him.

Elsewhere, as club action kicked into gear all over the country, Clare senior hurler Mark Rodgers scored a masterful point for Scarriff after leaving his hurley behind him. 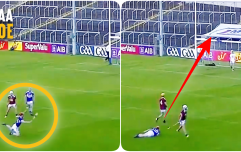 END_OF_DOCUMENT_TOKEN_TO_BE_REPLACED

Buff Egan was up and down, he was all around the place from Clare to Waterford to Kilkenny but of all his brilliant coverage over the weekend, there was nothing as dramatic as the goal he watched in the south-east. Ballysaggart, home of the Bennett brothers, looked destined for glory until deep into injury time when Mark O'Brien broke their hearts with a composed drop-shot into the top corner.

And @buff_egan, he was at Crusheen-Ballyea on Fri, down in the Déise last night and he's in Kilkenny for Ballyhale-Bennettsbridge today.

It's good to have it back!


popular
Shane Lowry had no problem setting reporters straight at Ryder Cup briefing
Rob Kearney taught a classic GAA lesson when he tried to have the craic in second game back
The scenes in Newbridge as the biggest hit and hope ever knocks Moorefield out
When Liam Brady lit into Brian Clough for his dismissive Mick McCarthy comments
Kieran McGeary on his relationship with Mickey Harte and his role in Tyrone's success this year
How one text message a teammate sent Kieran McGeary proves that Tyrone's success was a team effort
"I just knew that Karen was going to be there with us... I absolutely adored her" - Maeve Kelly

You may also like
6 months ago
"Hang on lads, there is more to life outside of Dublin" - Connellan is a rebel with a cause
11 months ago
"I got my feedback that my explosive pace wasn't good enough"
11 months ago
QUIZ: Which is the correct GAA crest?
1 year ago
Dessie Dolan's final score from play a fitting reflection of how he went about things
1 year ago
Magnificent Murtagh still making inroads for Clonkill and he'll be around for a while yet
2 years ago
Westmeath secure senior status for first time after All-Ireland Intermediate victory
Next Page