The future is bright for the red and white.

Kerry had some tremendous individual players, all silky, skilful and elusive in the All-Ireland minor in Tullamore on Sunday, but Derry were the better team and that's why, after one of the most dramatic finishes imaginable, they are the champions. 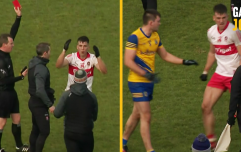 END_OF_DOCUMENT_TOKEN_TO_BE_REPLACED

Martin Boyle's boys played a brand of football that was as thrilling as it was fast-paced and even when the whole thing went against them late on, when a short kick-out went wrong and Kerry undeservedly went two points up, Derry still had the belief and the character to go down the other end to win this game.

That said it all about a team who, with all their attitude and skill, will have a whole county buzzing.

Derry started the better of the two teams with Matthew Downey, son of the great Henry, playing with the composure and confidence of his father to send Derry into an early lead. You could call Downey the orchestrator but all around him there were movers, groovers and young footballers playing with no shortage of confidence. In midfield, big Dan Higgins was throwing his weight around but it was the two flyers of wing backs, in eventual man-of-the-match Mark Doherty and Lee Brady, who were making inroads every time they ran onto the ball.

Up front Lachlann Murray and Niall O'Donnell were always dangerous so even when Keith Evans and a powerful Maunsell turned on the style to give Kerry a 0-7 to 0-4 half-time lead, you still felt that Derry had a kick in them.

That they did. Their first goal, finished by Lachlann Murray but manufactured by the whole team was something breath-taking and from that moment on, they never looked like losing this game.

The Derry minors have been playing some brilliant team football all day but this goal is just sensational.

Sport has a way of catching you when you least expect it and when the kick-out went wrong and Kerry took their chance, you looked at the clock, deemed it too late and the heart went out to the Derry boys. They weren't feeling sorry for themselves and from the very next kick-out, they played it patiently up the field before winning a penalty from a foot-block.

Oh my God. The scenes in the minor final. Kerry scored a complete fluke after a short kick-out went wrong to go two up. Derry went down the other end, won a penalty, Matthew Downey nearly burst the net and now they're All-Ireland minor champions 🔴⚪️🏆

Downey blasted the penalty like there wasn't a nerve in his body and from there they held onto win. That rounded off a brilliant performance from a brilliant team.