Munster or Leinster - where are the better hurling counties?

You could spend a whole day on it. 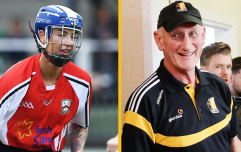 END_OF_DOCUMENT_TOKEN_TO_BE_REPLACED

As things stand, however, the hunch, you'd have to imagine, goes to Munster. Limerick are the kingpins, Clare aren't far behind while Cork, Waterford and Tipp could all beat the majority of teams on their day. There's probably more hype surrounding the Munster championship too but, speaking on The GAA Hour Hurling Show and, as a Leinster man true and true, James Ryall sure does make an interesting point.

"I did have a look," the six-time All-Ireland winner said, "and, I suppose, out of the Leinster teams, if you take the big four, if we can call it that - Kilkenny, Galway, Wexford, Dublin - that created six games in the whole championship and one of them was a draw, two more had one point in it, there was a four point, a six point and then there was Kilkenny's 17 point annihilation of Dublin. But five of the games were really competitive."

"This is me speaking with my Leinster cap firmly on now, but as much as the Munster championship is built up, there were some serious heavy defeats down there and you know it seems to be glossed over a lot."

Clare beat Waterford by 11 and Tipp by eight while Cork beat the Premier by 12. Limerick, meanwhile, beat Cork by 11 and Tipperary by seven. Ryall was on a roll at this stage, and that was when he brought the under-20 All-Ireland into it.

END_OF_DOCUMENT_TOKEN_TO_BE_REPLACED

"And take the under-20 championship - on Twitter, I'm not much of a Twitter man now - but during the Leinster U20 final (between Kilkenny and Wexford), they were saying that the pick of Leinster wouldn't come close to Limerick - but then when it came to the All-Ireland, Kilkenny somehow came out and beat Limerick in it. I would wonder, going back to the senior for a second, if you take this Limerick team now, who are the two or three top teams that can most likely take them down, and that's a question I'd ask Darach?"

Honan gave his nod to Clare and Kilkenny. And while he didn't come ready for a Munster vs Leinster debate, he still gave as good as he got.

END_OF_DOCUMENT_TOKEN_TO_BE_REPLACED

"I didn't have my statistics ready for this Leinster-Munster debate now, James did, but I'd come back to you this way and say that if you take the two provincial finals this weekend, I'd say Limerick and Clare are the two stronger teams than Galway and Kilkenny."

Whatever you're having, there's no denying that it's going to be a great provincial final weekend this weekend coming.


popular
“Players flourished when Roy Keane left” - Rio Ferdinand on why Keane was a 'detriment' to Man United
"To be able to call myself the fastest man in Irish history is just amazing" - Olatunde overjoyed after record-breaking run
Specsavers troll former Liverpool star for Darwin Nunez headbutt claim
Jamie Carragher on the three Man United players Erik ten Hag can't trust
"I went up to the Italians and gave them a big auld shoulder" - Paul O'Donovan does it again
"There's a hole in the ceiling, about three-foot round" - Andy Townsend on life as Gazza's housemate
"It was unfair on the Galway backs” - Tomás Ó Sé admits that Kerry benefitted from unfair rule
You may also like
3 weeks ago
Old clip of Brian Cody giving hope to players who don't have speed is as good as coaching gets
3 weeks ago
Henry Shefflin's classy tribute to Brian Cody has a lovely ring to it
3 weeks ago
Kilkenny set up All-Ireland Camogie Final with Cork after seeing off Galway
3 weeks ago
JJ Delaney on how Brian Cody kept him grounded after Hurler of the Year honour
3 weeks ago
Brian Cody's final moments as manager showed the respect the Kilkenny players had for him
4 weeks ago
To be there the day TJ Reid almost hurled the field on his own
Next Page