20 minutes in and Tipperary are purring.

John Bubbles O'Dwyer picks up a ball around the midfield and he's already looking for John McGrath. The Loughmore-Castleiney man is on the same wave-length and he leaves no other than Noelie Connors in the vapours.

Bubbles bombs off the shoulder for the return. McGrath lands it and Bubbles sticks it. It was total hurling from Tipperary's two magicians, the whole team have been on song for 140 minutes now.

Alongside the rejuvenated Bubbles and the classy McGrath, Jason Forde is playing the hurling of his life. Bonner Maher and Dan McCormack are working their socks off as per and Michael Breen, Seamus Callanan and Noel McGrath are pitching in too.

Tipperary's defence has been untested and after two rounds of this Munster championship, it's the Premier County who are sitting pretty with four points.

After their comprehensive victory over Waterford, Liam Sheedy paid compliment to his sniping forwards.

“Anyone looking at these guys play over the last number of years, there are some really really good forwards there. They are playing very well as a unit and some of their quality of striking today was top class...Some of the scores weren’t easy to convert but they converted those scores really well," he says.

He's talking about these kinds of scores.

John McGrath does NOT miss. Follows through on every shot like a professional golfer would 👏⛳️pic.twitter.com/YREg57r0gv

“The key thing is that it is very competitive and when you have competition it really helps the make up of our forward line."

They're moving like they did in 2010, like an Eamonn O'Shea team would but Sheedy praised his whole backroom team for that.

"They don’t seem to be doing too bad at the moment but I am very fortunate to have Tommy Dunne, Darragh Egan, Eamon O’Shea, all three guys operate really well.

“Ultimately it is not about one player or one unit, it is all about the group and they are putting in a really really good effort and I couldn’t be happier in terms of their preparation and all we try and do is get that right but these guys deserve great credit for the way they are applying themselves."

That they are. Between them, Bubbles, Callanan, Forde and McGrath have hit 4-28 from play in the last two Sundays. 2-14 both days. 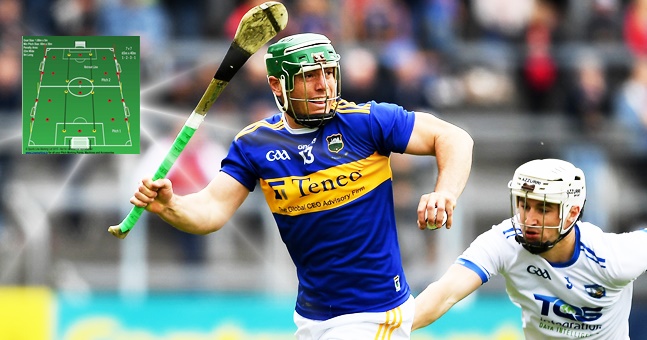 65 minutes with the genius that is Bubbles O'Dwyer

"As I said, I thought Waterford were really, really spirited and, I suppose, the home crowd behind us we drove on from there, but definitely the scoreline was a bit false in the finish. But, for us, it’s two points on the board and its job done and we get a bit of a break now and we start to get ready for the third game in this Championship"

It's a completely different story for Pauric Fanning and Waterford. The Deise have now lost two games on the trot and their hopes of progressing past the group stages of this Munster championship look extremely slim.

Confidence may be an issue in a group that has no win in their last eight championship games (Seven losses and one draw). The loss of Conor Gleeson to a red card obviously hampered their challenge here but even before that 29th minute blow, they didn't look to be anywhere near the same pitch as Tipperary.

The Mount Sion man is adamant that his group of players will keep on fighting however.

"Well, as regards picking up those type of lads, their as hurting inside as we are over the result. So there’s two ways we can go. We can leave the season peter out, or as you said we can fight for our lives, and I’d be very very surprised if it’s anything other than us fighting for our lives in Walsh Park when we play Limerick and when we play Cork. You know, it’s all about trying to rescue our season now and seeing what happens with that.

"Did we go toe-to-toe with Tipp there for a good while when we got back? Yeah, it’s just unfortunate that there was only patches of that for us. Then when we play like that you can see we can match the best, but we just need to do it on a more consistent basis for longer periods of the game."


popular
The SportsJOE 12 o'clock quiz | Day 135
The SportsJOE 12 o'clock quiz | Day 134
It was Pierre-Emerick Aubameyang's final but Emiliano Martinez's moment
"I was around the place like a Jack Russell, snapping at all the big guys"
"Me and him used to room together, and he was a bit of a nightmare"
"It's not about winning at underage. It's about building players and building people"
The SportsJOE 12 o'clock quiz | Day 133
You may also like
2 months ago
"I knew I didn't have the pace or strength, it was just get it and try kick it left or right"
2 months ago
"You had no other choice but to get down and dirty with these boys"
3 months ago
"It never crosses my mind that I lifted it on the pitch rather than on the stand"
3 months ago
GAA Hour | Tipperary v Galway 2001 All-Ireland hurling final
4 months ago
We give you the All-Ireland hurling final, you tell us the man-of-the-match
4 months ago
Even injury couldn't hold Richie Power's genius back
Next Page