The good news for Mayo fans...

"Cillian, Seamie, Fionn, and Donie Vaughan, they are probably just five or six days away so they are very close."

So said a downbeat James Horan after Mayo's Connacht semi-final loss to Roscommon.

END_OF_DOCUMENT_TOKEN_TO_BE_REPLACED

On the evidence of Saturday evening, every aching body will be needed. None more so than Cillian O'Connor. Mayo missed a number of frees in MacHale Park with the game in the melting pot with Robbie Hennelly, Evan Regan and Kevin McLoughlin all culpable.

The Ballintubber man's return will be crucial.

"We missed an awful lot of frees," reasoned Horan.

"Robbie took a few, Evan took a few, and we missed the last one. That's disappointing. We'll work on that. Kevin stood up and took it and missed it, so there you go..."

"You lose a game in the Connacht championship, it is not great, no matter what way you look at it. The players will get back training and we'll go again. The mileage and that kind of stuff, to me, isn't an issue. We've a lot of new guys in there and we've a lot of guys coming back from injuries so we'll see how it pans out..." 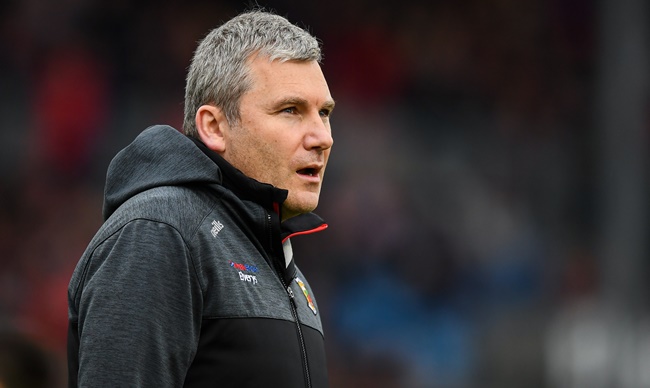 It wasn't just from placed balls that Mayo were profligate. Late misses from Keegan and O'Connor spring to mind and Horan agrees that their accuracy and composure is something that needs to be worked on ahead of the qualifiers.

"We kicked an awful lot more wides than they did so we just need to look at that and learn from it. We could have sneaked it, in the end, I thought. We had a very good chance to go a point up with time over and we didn't take it. In fairness to Roscommon, they came down and got the score. We'd be disappointed with the game, overall, in terms of how we played. We had 15 wides and two or three into goalkeeper's hands so you are not going to win many games when you do that. Good luck to Roscommon, they deserved their win today..."

Horan is adamant that there was no complacency in the camp and they'll be putting their head down before the qualifiers now.

"Roscommon are a very good team. I've been saying that for weeks. They obviously got two early goals. They were two poor goals from our point of view. But they got them. That took us a while to get back. We did get back in the second-half, but we just couldn't finish it out.
"We have four weeks to our next game. We'll definitely change a few things, we'll have to because we got beaten. We will see where we can make improvements. And we will play as hard as we can when we get back out on the field again."


popular
From Canada to Carlow in the name of hurling: Nicolas Redmond's journey to the Fitzgibbon Cup
Kerry's captain selection for 2022 sums up the problem with their outdated system
"It must be difficult to say no, having won a game and heading back together"
Chelsea forced to change Stamford Bridge changing room after Liverpool complaint
Ireland fitness update offers even more reason for Six Nations optimism
Jesse Lingard 'angered by lack of respect' shown by Man United
Eddie Jones shares great tale on hour-long chat with 'inspirational' Roy Keane
You may also like
3 months ago
O'Hora and Keegan hammer into each other, both of them only revelling in it
3 months ago
Sub goalie saves last-minute Diarmuid O'Connor penalty as Knockmore march on
3 months ago
James Horan hits out at "bonkers" stories and "incredible" claims after Mayo's All-Ireland loss
4 months ago
"Mayo have been back and back and back all the time. That's some resilience, to do that." - McGeary bats for Mayo
4 months ago
"Jesus, the man deserves an All-Ireland medal, but it doesn't look like he's going to get one now"
4 months ago
"There were murmurs that he didn't have it on the big days" - McCurry's redemption
Next Page