There were two other games he didn't play in but he, for one, never held them up with this dreaded mystique.

He lost a couple of games to a good side but he was never afraid to face them any time, any place. 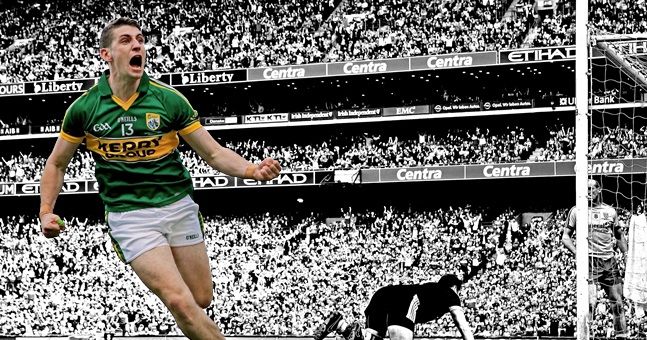 Back at the start of the league campaign, the deadly forward was on SportsJOE's GAA Hour podcast and he explained in no uncertain terms that Kerry were better set for the league this year because they had a consistent training base and a full squad going at it from the start.

He also explained how Kerry would beat their arch rivals as soon as they figured them out.

A couple of months later and they're not only champions, but Geaney has met Dublin twice more and he's still only been beaten by them twice.

Personally, he ended the day with eight points, four from play and he strolled straight back out of the lion's den with a look in his eyes as if to say, 'what the hell were you worried about?'

If it took Sunday to prove that the Kingdom weren't still hurting from the All-Ireland final loss of 2015 - or the semi-final loss of 2016 - then so be it. But Geaney warned us all.

"Even from that panel two years ago, it's a fresher panel, it's a new panel," he told The GAA Hour before the league began.

"Me, I don't have psychological scars from being beaten twice by them. You'd have to be beaten five times badly to be having psychological scars, not when you're close and you feel you should've beaten them - especially in 2015, with things going this way and that.

"Last year we could've beaten them as well, we had them on the ropes but we didn't finish them off.

"I'd be looking at why didn't we finish them off, rather than we can't beat them.

"We can beat them, we just have to figure out what it is to stop them. When we do that, we will beat them."

"We will beat them," he said with pure conviction at the time and, two sparring sessions later, they've come out on top.

Now, the real action begins. Come September, no-one will really care about this league final but, on that road now, the Kingdom will march with their chests out again comfortable with the reminder of who they are.

For Paul Geaney though, he never lost sight of that.

This is who they are.


popular
In 86 seconds, Patrick Bamford becomes English football's voice of reason
Jose Mourinho is the picture of happiness and health after Spurs sacking
'Make him hurt, make him yours' - How the Springboks ruled the world
Springboks legend Tendai Mtawawira tells us what he really thinks of Ellis Genge
'Beast' Mtawawira is a big fan of Mike Ross' Lions front row
Jose Mourinho is about to step up and become the hero football needs
"We did find him hours later and we made up." - How Flynn and his best friend came to blows in Croke Park
You may also like
3 months ago
"There were some tough battles but I was happy to test myself against the best"
4 months ago
"I love soccer. I'm still stone mad about soccer" - No regrets for talented soccer player O'Sullivan
5 months ago
"In Kerry, it's nearly like a religion."
5 months ago
No victory speech for Clifford as Cavan drop down the Leagues
6 months ago
"There’s nothing to state ‘lucky winner.' An All-Ireland medal is an All-Ireland medal"
6 months ago
Marc Ó Sé: Split the season, give Tony Brosnan his Kerry chance
Next Page