No mercy for the Kenmare Shamrocks clubman.

Question and Answer sessions with GAA players can be hits or complete misses. Paul Geaney's is a flippin' smash-hit.

The Kerry sharpshooter sat down for a Q&A that features on the AIB website ahead of Sunday's All-Ireland semi final against Mayo at Croke Park. It begins in rudimentary fashion - Geaney's proudest moments, toughest opponent and dream signing - before getting to the juicy stuff.

END_OF_DOCUMENT_TOKEN_TO_BE_REPLACED

There is a back-handed compliment to 'best dressed' teammate David Moran and Shane Enright is dropped in it as the panel's ladies' man.

However, it is when he is asked about his worst dressed teammate that Geaney lights up. Poor Stephen O'Brien won't live this one down for a while. 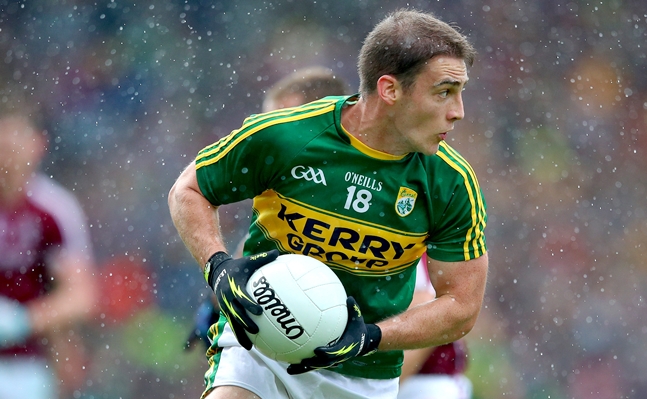 Geaney recalls a class tale from his time at University College Cork with O'Brien on playing Sigerson Cup football. He comments:

"Stephen O'Brien [is worst dressed]. I’ll tell you a story: we were going back from the Sigerson in Galway after losing the semi-final and there was money put together so we could get some drink in Tescos for the way home.

"Stevo picked up a pair of jeans in Tesco and threw them into the basket, and wore them for two days after! I think he still has them."

UCC won the Sigerson in 2014 with both Geaney and O'Brien in the panel. The last four loss had come the previous year so O'Brien has those cosy Tesco jeans four years now.

He got himself a bargain that day.


popular
"I trained with a guy that was born in 2004 the other day. We reckoned Earlsie could be his father!" - Peter O'Mahony
Nigel Owens on most annoying players to referee (three of them are Irish)
"I asked one question and lads slagged the arse off me!" - Johnny Sexton on Roy Keane chat
What is the story with Tyrone clubs' woeful record in the Ulster championship?
Six All Blacks but no Ireland players in world's top 20 list headed by Antoine Dupont
The story of the GAA's greatest ever minor
Longford GAA movie explores the tale so many young footballers can relate to
You may also like
1 year ago
Hard to argue with Club hurling team of the year as Ballyhale and Borris-Ileigh dominate
2 years ago
'The Iceman' inspiring Neil McManus to get the best out of himself and the Glens of Antrim
2 years ago
The club that started the year with no manager and ended up in an All-Ireland final
3 years ago
Quiz: Which classic club GAA player are you? Take the test to find out
3 years ago
Dr Crokes have a simple way to produce good footballers but not enough clubs do it
3 years ago
The best club football 15 in recent history
Next Page