Dublin's drive for five will be done without the excellent, astute services of the Fingallians clubman.

Six-time All-Ireland winner and four-time All Star Paul Flynn has announced his retirement from inter-county football.

After 11 years playing for Dublin, Flynn is stepping away and admits that, after recent back surgery, he 'struggled to reach the fitness required for inter county and to reach the standards that I set for myself'.

Flynn won the first of his six Sam Maguires back in 2011 and was a mainstay of Pat Gilroy and Jim Gavin's successful sides. In latter years, he was often used as an impact sub by Gavin but still contributed massively to the county's stellar run of title victories. 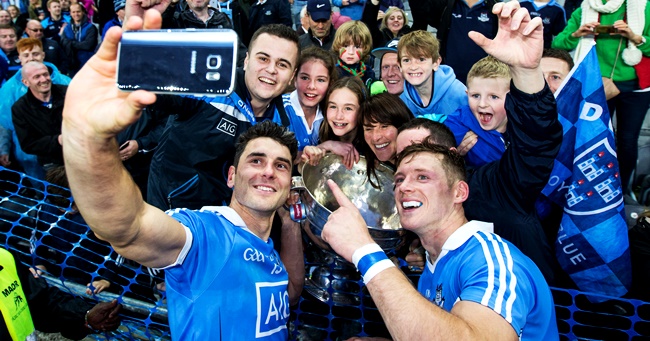 The statement Flynn sent out to confirm his retirement is as classy and respectful of the game, and his colleagues, as the player we came to know over the past decade. It reads:

'After 12 proud years wearing the Dublin jersey I have made the difficult decision to step away from the Dublin football panel. It’s an enormous privilege to play for your county and I feel incredibly lucky and proud that I got to play for Dublin for as long as I have.

'Dublin football has played a huge part in my life and I will be forever grateful for all that it has given me. I was honoured to train and play alongside exceptional teammates week in week out, to have enjoyed the support of extraordinary managers over the years and to have had the support of dedicated, world class backroom teams.

'I’m grateful for all that they’ve taught me over the years and for the lifelong friendships that I made along the way. My football career started and ended with the support of my club, my family and my friends and to them I am eternally grateful.

'Since my back surgery last year I’ve struggled to reach the fitness required for inter county and to reach the standards that I set for myself. While my heart says play on unfortunately my body says it’s time to call it a day.

'I’ve loved every minute of my journey with Dublin football and to have played in front of its dedicated and passionate supporters has allowed me to make memories that I will cherish forever. I move on now with gratitude to the next chapter of my life.'

He bows out at the very top, in a winning team.

In the past year, he has got more and more involved in the Gaelic Players' Association.

popular
The SportsJOE 12 o'clock quiz | Day 76
The SportsJOE 12 o'clock quiz | Day 75
SportsJOE 2000s Football Quiz | Round 4
Cristiano Ronaldo and Ronda Rousey among top 20 most charitable athletes in the world
Every Premier League club crest, ranked from worst to best
Sadio Mane 'agreed terms with Real Madrid' before Zinedine Zidane's departure
Justin Gaethje tells Conor McGregor to wait his turn
You may also like
2 weeks ago
Seven-time All-Star Goldrick using time off to strengthen and improve
2 months ago
"Sometimes sport can overwhelm you, it was time for him to take a deep breath"
2 months ago
Dublin hurler Mick Carton back on the mend after winning another battle
2 months ago
"I'd spent hours and hours honing my left foot with my dad when we were young"
2 months ago
April club month a goner as virus threat causes longer delays
3 months ago
"That's not just handbags, there is a lot of really serious punches being thrown"
Next Page