Eight time Sigerson Cup winners Queen's University were came a cropper at the very first hurdle last year against a David Clifford inspired Tralee and were it not for a more merciful system this time around, they'd be early goners again.

A sluggish start from the home side granted Maynooth chances early on and with inside forwards Padraig Fogarty and Jimmy Hyland in clinical form, Queen's were punished.

They trailed by one at the break and though they improved in the second half, it wasn't enough as a gritty Maynooth side held on to win by the bare minimum.

This year, there's a second chance for teams beaten in the first round and Shane Mulholland's side will host NUIG in the backdoor of this competition next Wednesday.

Maynooth meanwhile, are into the quarters. 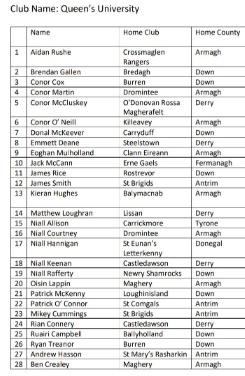 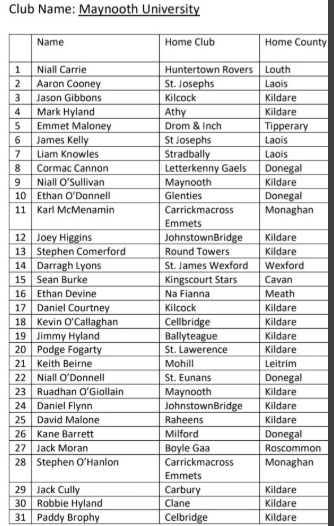 That man Fogarty - a key cog in the Kildare forward line in recent years - was on fire and he kicked some fine scores at the Dub, none more so than this curling beauty when the angle was as tight as water.

A huge upset was on the cards in the only other Sigerson Cup game of the day with a David Clifford-less Tralee IT leading Ulster University by 0-7 to 0-4 at the interval.

County man Jack Savage stepped up to the plate in the Fossa star's absence due to a shoulder injury, nailing every free that came his way in the first half while Mark O'Shea and Dara Moynihan were also in fine form.

A star studded Ulster University line up, which included Ryan McHugh, Eoghan Bán Gallagher, Tyrone's Michael McKernan, Paddy Durcan and Lee Brennan hit the ground running in the second half though and despite the loss of their centre back McKinless to a red card, they were undeterred with that man Durcan - so often Mayo's hero - bombing forward for 1-2 in the space of ten minutes to turn this game on its head.

On they march to the quarters now.


popular
Jose Mourinho is the picture of happiness and health after Spurs sacking
'Make him hurt, make him yours' - How the Springboks ruled the world
In 86 seconds, Patrick Bamford becomes English football's voice of reason
Springboks legend Tendai Mtawawira tells us what he really thinks of Ellis Genge
'Beast' Mtawawira is a big fan of Mike Ross' Lions front row
Jose Mourinho is about to step up and become the hero football needs
"We did find him hours later and we made up." - How Flynn and his best friend came to blows in Croke Park
You may also like
1 year ago
Monaghan livewire lights up Glasnevin to seal Sigerson glory for DCU
1 year ago
The legend that is Pat Critchley has IT Carlow on brink of Sigerson history
1 year ago
Molloy braced for another clash as Sigerson and club fixed for same day
2 years ago
Sean O'Shea has Mallow drooling but Jarlath Óg Burns is some man to fetch
2 years ago
Letterkenny IT win Trench Cup after outrageous scoring run in final minutes
2 years ago
UCD stunned in Sigerson semis after being held scoreless for 38 minutes
Next Page