Noel McGrath had been on the receiving end of an off-the-ball belt from Paddy Leavy when a minute later, he made his way back to the Ballygunner man to settle a score.

McGrath was clever enough not to use a hurl just a shoulder to hit Leavy back but the Ballygunner man went down and he went down like he'd been hit by a hurl. Referee Johnny Murphy made his way over to his linesman who, given that he was looking at McGrath's and Leavy's backs when the contact was made, couldn't possibly have known the extent or the details of the collision.

Murphy called McGrath over and immediately you feared the worst. He flashed his red card and reeling with the shock of it all, the Tipperary man could barely muster the strength to give out about it. Within seconds he was head in hands in the Loughmore-Castleiney dug-out, his game and Munster championship over in unjust circumstances.

END_OF_DOCUMENT_TOKEN_TO_BE_REPLACED

The last thing you want to do is criticise officials but given that Murphy didn't seem to see the collision and given that his linesman couldn't possibly have seen it, to make such a big call on what appears to be guess-work is really, really poor.

To Loughmore-Castleiney's credit, they rallied and they rallied like always do. Murphy levelled things up with some soft frees as is always the way but with Noel McGrath looking so sharp to that point, his loss was unquantifiable for the Tipperary champions.

"I don't understand it for a second," said Mícheál Ó Domhnaill on TG4.

Noel McGrath got sent off for that ?! hurling is finished as a contact sport @GAA_BEO #GAA pic.twitter.com/Nt3HdDeQqs

"I don't understand it either," added Michael Rice, "He didn't use his hurl. He used his shoulder. There is no way that's a red card." added the Kilkenny man. 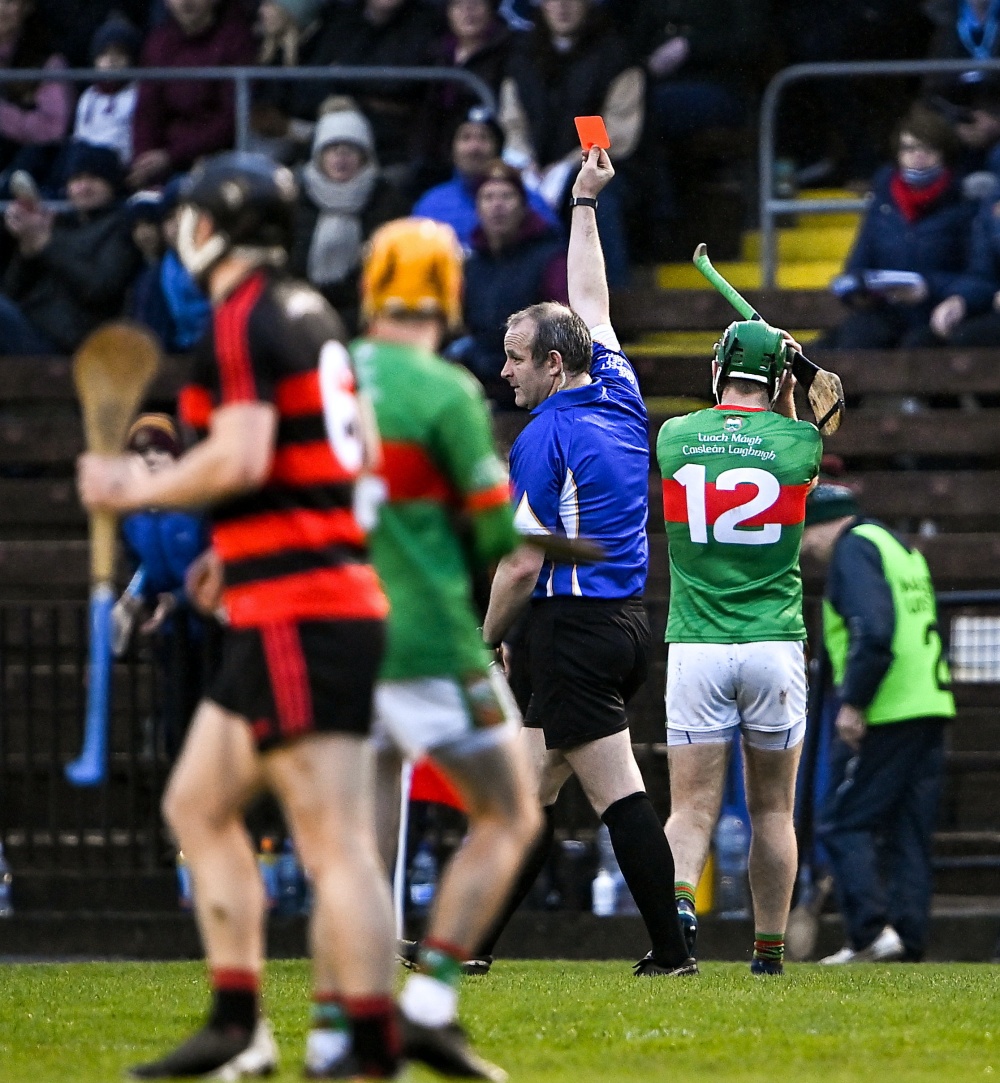 Unbelievably, things were about to get worse. Having won a penalty with ten minutes left and with just four points between the sides, Noel's brother John was shown a second yellow for flicking the ball out of Barry Coughlan's hand.

END_OF_DOCUMENT_TOKEN_TO_BE_REPLACED

Again, The Ballygunner man made a meal out of it before the referee took centre stage. In terrible weather conditions, Dessie Hutchinson finished the Tipperary champions off but after those decisions, it all felt like an anti-climax.

Either way, Loughmore-Castleiney can be proud of all they've given to this club season. For Ballygunner, it's Munster final time.


popular
QUIZ: You have 60 seconds to answer one Premier League goalkeeper question
David Meyler on how Kenny Dalglish almost signed him for Liverpool
Sean O'Brien could get to play England, at Twickenham, in his final game
Boris Johnson slams Jurgen Klopp for defending Liverpool fans booing national anthem
Gearoid Hegarty's harsh red card leads to a heated debate in The Sunday Game studio
"I think there are only five Kilkenny players who are guaranteed to start on any given day" - Cody's motivational methods
Jamie Vardy says 'Wayne Rooney is talking nonsense' about telling his wife to 'calm down'
You may also like
3 weeks ago
Rory Hayes a class act on and off the field as Clare destroy Tipp
3 weeks ago
"We kind of played a double centre forward to an extent." - The Tipp tactics that gave Limerick a fright in 2021
4 weeks ago
Liam Sheedy and Derek McGrath disagree on throw ball in Tipp-Waterford
1 month ago
Aussie Gleeson shows Waterford what they were missing with game-changer of a second half
1 month ago
Orla O'Dywer becomes first Irish female to win AFLW All-Star as Staunton somehow misses out
1 month ago
Tipperary couldn't ask for any more from Russell who ran himself into the ground
Next Page