Turlough O'Brien doesn't see much future for the new rules.

Carlow began their season with a 0-12 0-8 loss to Westmeath in the opening round of the O'Byrne Cup on Sunday afternoon.

In front of a measly crowd at Cullen Park, the visitors looked fitter and their foot-passing was slicker than the home side, who struggled at times to come to terms with the new rules being trialled.

Turlough O'Brien doesn't blame his players for this.

"There's a lot of ball being turned over, that's the big thing, players are indecisive, they're getting caught because they can't use the handpass."

Full time in Carlow and it's a 0-12 0-8 win for Westmeath in the first round of the O'Byrne Cup pic.twitter.com/MvAVsofYSy 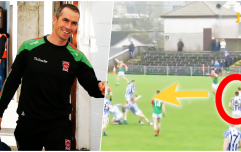 END_OF_DOCUMENT_TOKEN_TO_BE_REPLACED

Carlow were caught out five times for hand-passing the ball more than three times in a row in their season opener, with Westmeath reaping the reward for putting them under pressure in possession.

And O'Brien bemoaned the impact of the hand pass rule, in particular, claiming that players are being forced to kick the ball away aimlessly leading to lots of turnovers.

"I wouldn't be hopeful. I don't think it's a better spectacle when the ball is being kicked away like that. No one wants to see that.

"When there is a sweeper in play it's nearly a recipe for a turnover, last line in particular, turnover after turnover and here today that's going to be a problem, a big problem. I don't think it's going to add anything to it, when teams are at full strength and more competitive it will be even worse," he said.

If O'Brien has his way, these rules won't be seen past the O'Byrne Cup and the other pre-season competitions.

"I don't think it's a case of not being familiar with it (either), it's just your options are so limited. This game is played at a very fast pace and you only have a split second to make your mind up and if the handpass is not on you are going to get closed down very quickly. Lads are kicking the ball because they have to and are getting turned over.

"Everyone gets frustrated and the standard of the game goes down. I don't think today added anything to it. If you are looking at that game today you wouldn't say these rules are making a fantastic change to the game for the positive, I didn't see that."


popular
The SportsJOE 12 o'clock quiz | Day 134
"It's not about winning at underage. It's about building players and building people"
"Me and him used to room together, and he was a bit of a nightmare"
Excitement in Mitchelstown as Cork man set for AFL debut at 20
The SportsJOE 12 o'clock quiz | Day 133
A starting XI of the best free agents available this summer transfer window
PIC: Rugby league star deletes Twitter after scorned girlfriend posts infidelity photo
You may also like
8 months ago
Magnificent Murtagh still making inroads for Clonkill and he'll be around for a while yet
10 months ago
Westmeath secure senior status for first time after All-Ireland Intermediate victory
1 year ago
Hurling team of the weekend
1 year ago
Westmeath's Killian Doyle registers outrageous 0-17 against Antrim
1 year ago
Conway shoots the lights out in battle of the sharpest Joe McDonagh shooters
1 year ago
"Westmeath probably have the best full back in hurling at the moment in Tommy Doyle"
Next Page