Westmeath hurler Niall Mitchell scored yet another crucial goal for The Downs as they qualified for the Leinster senior football final.

The Downs' hung on for a 2-12 to 0-17 victory over Meath champions Ratoath with Mitchell's well-taken second half goal proving decisive.

Ratoath did score the last five points of the game, and had a chance to level it up deep into injury time, but Jack Flynn's long-range free tailed wide and the Westmeath men hung onto reach their first Leinster final in fifty years.

END_OF_DOCUMENT_TOKEN_TO_BE_REPLACED

Westmeath's Tailteann Cup winner Luke Loughlin was very impressive for the Downs, the dynamic forward scoring five points as well as having a hand in many others.

He set up Ciaran Nolan's first goal after a mistake in the Ratoath defence and then finished the second one well, after some good work by Andrew Kilmartin. Mitchell's goal-scoring threat offers the Downs a valuable dimension in attack - he also netted the only goal in their county final win over St Loman's last month.

You can watch some of Lar Wall's side's impressive attacking play below.

That pick-up from Niall Mitchell though 🤤pic.twitter.com/mR26Gtjfxd

The Downs have a second goal as Niall Mitchell finishes to the net. An exciting Leinster clash live now on RTÉ2 and the RTÉ Player - https://t.co/j90jEuzRU2. pic.twitter.com/V4kdn926vI 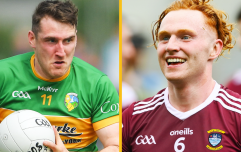 END_OF_DOCUMENT_TOKEN_TO_BE_REPLACED

"It’s unbelievable to get this win. We are a special club with special ambition and this is just part of our journey," said man-of-the-match Luke Loughlin afterwards.

The Downs will take on Kilmacud Crokes in the Leinster final, after the Dublin champs coasted to victory in the second game of the Croke Park double-header.

Portarlington gave Crokes a very good game last year, only losing by two points at the same stage, but they never got going this time around. Indeed, such was Crokes' dominance in the game that they could even take off Shane Walsh with 25 minutes to go.

Walsh had been struggling with a virus in the lead-up to the game and said afterwards that some of Sean Boylan's 'magic potions' helped him recover in time for the game. He still kicked 0-3, as did Dara Mullin while Andrew McGowan's unorthodox goal gave them plenty of breathing room.


popular
Ballyhale's Colin Fennelly felt Ballygunner's victory speech was disrespectful
Eniola Aluko responds to criticism after on-air mistake on ITV
Brazil star responds after Roy Keane slates dancing celebrations
Rory McIlroy explains 'falling out' with Shane Lowry that lasted a few years
Roy Keane reacts to Brazil's jubilant celebrations in first half demolition job
Roy Keane handled Gary Neville’s goal celebration as most Irish fans would
World Cup 2022 Day 16: All the major action and talking points
You may also like
1 month ago
"We've been waiting for this day to come" - Mitchell gets over hurling disappointment with match-winning goal in football final
1 month ago
GAA JOE Team of the weekend
2 months ago
Doyle bridges the gap for Westmeath as Limerick eye another big All-Star total
4 months ago
'They're not forgotten' - Kieran Martin hailed for Westmeath heroics after death of clubmate
6 months ago
New York coming to Tullamore in exciting Tailteann Cup quarter final draw
9 months ago
"You know how challenging it is, mentally and physically" - Dillon back after four serious injuries
Next Page