They're tough as nails up in the glens of Antrim.

And Ciaran McKay is one of the toughest. He's only a minor but he doesn't know anything other than tough, brave and hard hurling.

He was playing for Loughgiel Shamrocks in the Antrim minor hurling final against Dunloy last Sunday when he put his bare hands on the line for his club crest.

END_OF_DOCUMENT_TOKEN_TO_BE_REPLACED

The result didn't go Loughgiel's way in the end, with Dunloy winning out by 1-19 to 3-12 but that wasn't for the want of trying on Loughgiel's part and that man McKay embodied this spirit, heart and courage perfectly in the first half of the game.

Half back McKay won possession in the backs before driving out past a couple of Dunloy men. Along the way, his hurl was pulled out of his hand and when his kick-pass went astray, he was on the back foot.

The ball broke to Dunloy's Rory Mullan but he had work to do if he wanted to score. He'd have to get past that man McKay first.

Hurl or no hurl, it didn't matter. The Antrim youngster stuck to Mullan for a couple of yards before instinctively and heroically attempting to block Mullan's shot with his bare hands.

Showing complete disregard for his own safety, McKay put himself on the line for the good of his club. In the end, the shot went over but with spirit and courage like that, you just know a man like McKay will be heard tell of in the future. 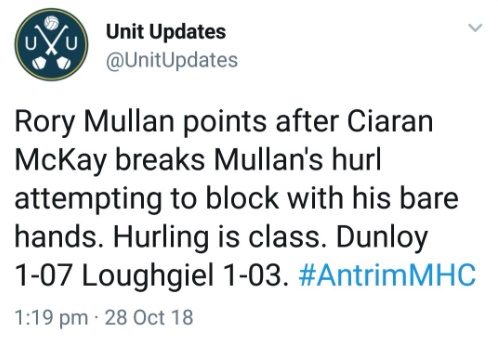 You can watch the video from the game here.

Amazing Video! See a minor hurler trying to block without his stick and getting his opponent's stick broken over his hand! Hurlers truly are a breed apart.. #GAA pic.twitter.com/5IKbAz1a2G


popular
Red cards, slips, heroes, villains and last second equalisers - Derrygonnelly's extra time win over Dromore had it all
GAA club transfers that shocked the county: Jason Sherlock
Here's all the GAA games on the tube this weekend as the provincial championship heats up
Fermanagh footballer opens up about losing her mum to suicide and urges people to seek counselling
Ruesha Littlejohn gate-crashes Katie McCabe's interview after another player-of-the-match display
Jordan Larmour enjoys satisfying bit of revenge on Mack Hansen
Ronnie O'Sullivan on why he staged sit-down protest during UK Championship defeat
You may also like
1 month ago
Drama in Antrim as semi-final may have to be replayed due to error with extra time
2 months ago
Antrim manager Enda McGinley backs league-based championship restructure
2 months ago
"I just knew that Karen was going to be there with us... I absolutely adored her" - Maeve Kelly
4 months ago
Laois rise to the occasion to relegate Antrim in an absolute thriller
5 months ago
Antrim Ladies Gaelic football team - The only Ulster GAA team with all-female coaching staff
5 months ago
Danny Sutcliffe catches puck-outs for fun as Kenny's plan comes good
Next Page