Mayo manager Kevin McStay has announced a 12 strong backroom team for the 2023 season.

Further appointments, it was stressed at his first press conference as Mayo senior football manager, will be made in due course. The roles of strength and conditioning coach, goalkeeping coach and performance analyst are yet to be filled but those posts aside, Mayo are ready for road.

As manager and coach/assistant manager, McStay and Rochford head the ticket but behind them, there are some distinguished and successful GAA people.

END_OF_DOCUMENT_TOKEN_TO_BE_REPLACED

These include Donie Buckley, who has previously worked with Mayo and his native Kerry, Damien Mulligan, who managed Belmullet to last year's county final and Liam McHale, who also worked with McStay in Roscommon.

Another eye-catching addition to the backroom team is psychologist Niamh Fitzpatrick, who worked with the team during Rochford's time in charge and famously helped Wexford to their 1996 All-Ireland senior hurling triumph. Manager Liam Griffin always heaps the praise on Fitzpatrick for her role in that win. 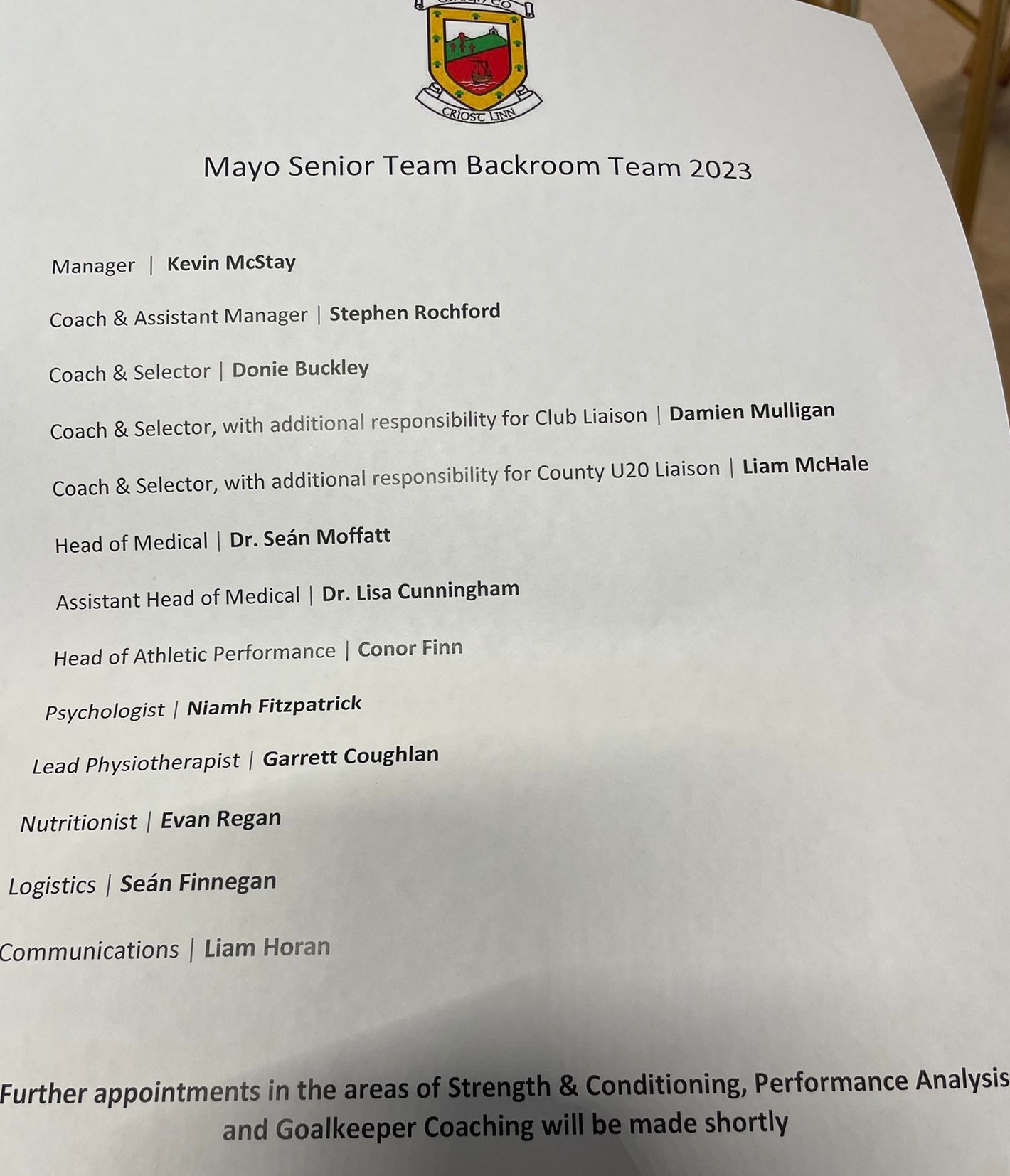 Having stepped down as Roscommon manager in late 2018, McStay had said that, due to the time constraints, that would be his last job in inter-county management.

“I suppose you should never say never should you really?" was what he said last night.

“I’m 60 now, I’d had a few goes at it. And I had no sense there was going to be a vacancy, I thought James would stay on for another year or two, he was doing really good work.

“I didn’t want the job just so I could say I was the Mayo manager, I want the job because I feel I have a lot to contribute and I feel I can make a difference," he added.

It was put to him that, as Mayo manager, there will be a lot of pressure down the line. That was where Stephen Rochford stepped in.

“There’s no pressure at all," he said while patting McStay on the back, "don’t mind them!”


popular
Roy Keane flatly rejects longstanding perception of ex-Man United midfielder Paul Ince
Allianz National Football League Round 1: All the action and talking points
Sean Dyche set to be named Everton manager after Marcelo Bielsa talks break down
British publication urges Gareth Southgate to claim Evan Ferguson for England
"Not cool" - Jurgen Klopp far from happy with question about late Liverpool fouls
John Egan breaks Wrexham hearts and denies Ryan Reynolds a Hollywood ending
Two Ireland stars included in Premier League's 'young English XI'
You may also like
2 weeks ago
"That fecker, again?!" - A Dubliner's perspective of going up against Lee Keegan
2 weeks ago
"I was like 'Jesus, I've no hope of getting into the team now.'" - 2017 A vs B game was Keegan to an absolute tee
1 month ago
"We’re better people in our house because of her" - Mayo's All-Star Danielle Caldwell continues to be inspired by sister
2 months ago
"I wasn't having the worst time of my life... I just wasn't happy." - O'Hora and Keegan discuss mental health struggles
3 months ago
Late Damian Casey named on Ring, Rackard and Meagher Team of the year for fourth successive year
3 months ago
GAA JOE Team of the weekend
Next Page